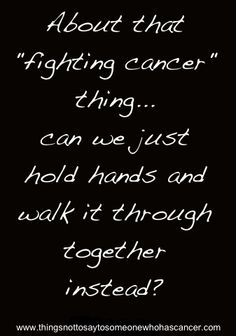 Many people like to talk about someone’s “brave battle with cancer”, like it’s a war; the implication being that if you’re tough enough, you can kick its ass and expel this nasty stuff from your body once and for all. There’s only one problem with that: it’s bullshit. Cancer is like luggage; you have it until you die. And, studies are showing that you can even pass it down to your children like a family heirloom. I hate to break it you, but if you’re “fighting” cancer, you’re fighting a battle you can’t win.

That Americans talk about dealing with cancer (or any illness, really) by using a violent metaphor isn’t really surprising; it’s the way we’re programmed. As I noted in America’s Love Affair, we have been inundated with images of violence almost from the minute we are born. Cartoons, video games, television, movies; all these forms of media bombard us with the idea that life is a struggle against evil and violence is the only tool that works. It’s an idea that has even made it’s way into our religion. Some faith traditions make a big deal of “spiritual warfare”; Onward Christian Soldiers is a very popular hymn; certain “Christian” leaders have called for people who are LGBT to rounded up and put in concentration camps and more than one “pastor” has advocated that they be exterminated. If violence can invade a religion based on a man who consistently rejected it (except once when he was royally pissed), what chance did healing have?

Right about now, you may be wondering “Who the hell is this asshole and what does he know about cancer?” Quite a bit, actually. In 2003, my father was diagnosed with Non-Hodgkins Lymphoma (he passed away in 2012) and, four years later, I found out I had colon cancer. Saying that I’m familiar with the subject is like saying the Titanic had a little mishap on its maiden voyage; i.e. a bit of an understatement. It’s this experience that tells me the “fight” metaphor is, at best, inapt. And, it could well be much worse than that.

It could be worse because it sets up an unrealistic expectation. As I said in the first paragraph, cancer is like luggage; you have it until you die. It’s not something that can be fought, beaten or subjugated. You’re not going to kick its ass and expel it from your body  once for all, no matter what society says. And, if you come at it that way, you can only lose. I know that sounds very pessimistic, but it’s true. Remember, this is life and no one gets out alive.

Maybe cancer can’t be beaten, but it can be endured, weathered and passed though. In the past, I’ve described the experience of dealing with cancer as a dance. But, that’s not really a good metaphor, if only because people actually like to dance. Believe me, no one in their right mind likes having cancer. “Season” has possibilities, even though it also implies an end to the issue. But, a “season” is something you endure, weather and pass though. And, there is an “end” to things; just not the one everyone wants to talk about.

Don’t get me wrong, I’m not saying cancer is a death sentence. With the treatments that are available today, you can live a long and productive life after being diagnosed. But, a part of living that long and productive life is a realistic outlook about your prospects. Setting yourself up for failure probably isn’t going to help with that. At some point in the process, most survivors come to understand that. And, it’s not a bad thing.