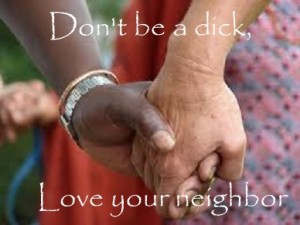 Like most writers, I keep a list of topics that I can’t use right away. The reasons vary; often, I might think an idea has merit, but don’t know how to approach it. Or, just as often, I’m in the middle of something else and can’t develop it right then. Sometimes, these things just click on their own. Other times, I’ll hear or read something that causes it to click. Today’s post is one I’ve sat on for a while. It started with the following statement: Sometimes, I think there should be a bible verse that goes  “A new commandment I give you: Don’t be a dick”  found in the book of First Curmudgeons.” It was one of those thoughts that came up while I was working on something else, so I filed it away. To be honest, I had forgotten about it until this morning when I remembered a conversation I had yesterday.

It was a slow day around the office at Love Wins. I didn’t have any trips to the food pantry on the schedule and, other than picking up bread from Yellow Dog Bread Company, the only task Maggie had for me was taking a few bags of stuff we couldn’t use to the thrift store. I wasn’t complaining, though, because it gave me some time to catch up with Hugh, who I haven’t seen in a couple of weeks. At some point in the free-wheeling exchange of ideas that passes for conversation between us, the phrase “Don’t be a dick” came up in connection with Christian behavior. Somehow, I got from that statement to the idea that “Don’t be a dick” isn’t a bad modern interpretation of the majority of Jesus’ teachings.

Before you get offended and write a scathing comment or (worse) leave with no intention of coming back because you think I’m saying Jesus used that kind of language, let me point out that I’m not saying that. I’m saying those four words aren’t a bad way to sum what he actually did say. Don’t think so? Then, let me enlighten you.

When a lawyer asked him what was the greatest commandment of all, Jesus replied

“The most important one is Israel, listen! Our God is the one Lord, 30 and you must love the Lord your God with all your heart, with all your being, with all your mind, and with all your strength. 31 The second is this, You will love your neighbor as yourself. No other commandment is greater than these.”

And, in John, one of the last things he tells his disciples is

In other words, Jesus talked about love more than anything else. And, love and being a dick are pretty much mutually exclusive.

Of course, someone is thinking “Jesus also said ‘Don’t even begin to think that I have come to do away with the Law and the Prophets. I haven’t come to do away with them but to fulfill them.’ What about that, Mr. Smart-ass?” I say that “Don’t be a dick” is the fulfillment of the law. And, you know what? The Apostle Paul agrees with me. In the 13th chapter of Romans, he says

“The commandments, Don’t commit adultery, don’t murder, don’t steal, don’t desire what others have, and any other commandments, are all summed up in one word: You must love your neighbor as yourself.10 Love doesn’t do anything wrong to a neighbor; therefore, love is what fulfills the Law”

Is interpreting these scriptures the way I have a little on the negative side? Yes, it is. Am I setting the bar incredibly low with this interpretation? Yes, I am. But, the truth is, we haven’t done so well with more positive, uplifting version and I’m hoping a little plain-speaking bluntness might get the message across. I’m not holding my breath until it happens, though.

Buy Me a Coffee