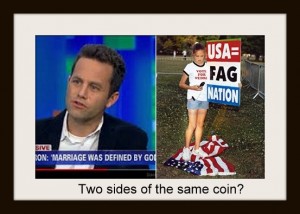 I want to speak to my conservative brothers and sisters right now. You guys have been using the phrase in the title quite a bit these days and, while I know this expression sounds nice, the truth is it’s  a dog-whistle phrase. And, by that I mean “an innocuous statement which is designed to trigger previously indoctrinated bigotry & hatred without being recognized by outsiders for bigotry or hateful speech.” This is not good, folks.

It’s not a stretch to say that most of you would never hold a sign saying “God Hates Fags”, protest at the funeral of a public figure who was an outspoken supporter of marriage equality or do any of the other things the folks at Westborough Baptist Church are engaged in. Instead, you wring your hands at the potential “damage” that could result from allowing people to marry the person they love. Or, you tell LGBTQ folks that something which goes to the very heart of their being (their orientation, gender, etc.) is a sin, an abomination in the eyes of God. And, that’s an awful thing to say.

The worst part is you claim that by doing all these terrible things, you are speaking “the truth in love”. Well, I’ve got news for you, there is neither love nor truth in these words. In reality, you are merely a sanitized version of WBC. If you want to know the truth, I have more respect for the Phelps clan than Kirk Cameron and the other high-profile anti-LGBTQ bigots. Or, any of the rest of you, for that matter. That’s because the folks at WBC are honest and open with their hate; they put it out there for all the world to see. The soft-sell from WBC’s less-strident allies (and make no mistake, you are allying yourself with them) may sound loving, but in reality, it is no less hateful than the ugly words that spew from the mouths of that ultra-radical bunch of nutjobs in central Kansas.

The truth is, you have yet to put up a cogent argument against same-sex marriage. Most of what you have to offer involve nebulous threats to the nuclear family, traditional values or the country at large. These arguments aren’t new, we heard the same  garbage in connection to inter-racial marriage in the 50’s and 60’s. Well, inter-racial marriage has been the law of the land since 1967 and the family hasn’t disintegrated, traditional values still hold sway (which is both good and bad) and the United States is still plugging along. No, the truth is you’re opposed to same-sex marriage because you think it’s icky. I hate to break it to you, but there is no love in denying people rights and protections because you find them icky.

I know might come off as a little harsh; it’s hard to hear that not only are you in league with some of the biggest assholes on the planet, you’re really just a toned-down version of the same. Believe me, it wasn’t easy to say all this, but I feel like I had to let you know what you’re doing  is a sin.

While Jesus had a lot to say about loving others, we have nothing from him about sexuality and gender issues. Oh sure, Paul mentions it a couple of times, but those mentions are far outweighed by his exhortations that we are all one in Christ. I have to tell you, making the LGBTQ thing the hill you want the church to die on pretty much tosses out what both men stood for. Like I said earlier, it was hard for me to tell you all this, but I felt like I had to “speak the truth in love” in hopes of saving your soul from the fires of Hell.

See how douchey it sounds when it’s turned back on you? Do us all a favor and stop using the word “love” when you say this crap. Because, the truth is, there’s no “love” in it what you’re saying. None at all.