I am currently reading Good Omens: The Nice and Accurate Prophecies of Agnes Nutter, Witch by Terry Pratchett and Neil Gaiman. It’s the latest read for the (Mostly) Men’s Book Club at CPBC and is a…, unique story about the Apocalypse involving witches, demons, angels, bikers and more. You could say it’s an irreverent story. Of course, you could also say the Noah story is about a thunderstorm. Granted, it’s not a book you would expect find sitting around a Baptist church. But, then, College Park isn’t like most Baptist churches. For example, this demotivator is hanging outside the pastor’s office door: 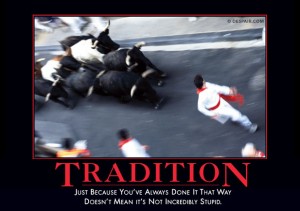 See what I mean? Now, if we were a “normal” Baptist church, we’d be reading the Left Behind series. I’m so glad we’re not normal. I cannot stand those books.

You’re probably wondering why, as a good Christian boy, I don’t care for the epic narrative crafted by Jerry Jones and Tim Lahaye. I don’t like it because it gets Revelation completely wrong, being based on something called dispensationalism. That’s a big word for a biblical interpretation which says God has related to humanity in a chain of dispensations or eras of history. The funny part of it all is that the majority of people who believe this way claim they don’t interpret the Bible, they take it literally. Or, to paraphrase one of their adages “The Bible says it. I believe it. That settles it.” Except, in this case, the Bible doesn’t say it.

The plot of Left Behind revolves around the Rapture and subsequent Tribulation, neither of which occur in Bible as presented. Their story is based on God doing something that occurs nowhere else in the Bible, taking people out of a bad situation (the Rapture) and 7 seven years of affliction (the Tribulation). While there is tribulation aplenty in the Bible, the idea that it will last 7 years is a little more recent, arrived at by a fellow named Darby who did some impressive biblical gymnastics to get there. It’s all a little weird.

Don’t get me wrong, I love a weird story…, as long as it’s good. But, while Revelation is filled with amazingly weird stuff, Jenkins and Lahaye have told an awful story. Mostly, because they’re true believers and you can’t tell a story this odd without having your tongue firmly in your cheek at least part of the time. Unfortunately, humor/snark is not the strong suit of the true believer. Happily, Pratchett and Gaiman operate under no such constraint.

If it was just a matter of bad story-telling, I wouldn’t care that much about the Left Behind books. But, it’s about so much more. It’s about a mindset that thinks the world is ending soon (even though it’s been ending since the Apostle Paul’s day), so why bother making it a better place? That mindset allows a pastor to say “I know who made the environment. He’s coming back, and he’s going to burn it all up. So yes, I drive an SUV.” It allows some Christians to worry more about a person’s soul than their stomach. And, it ignores practically everything Jesus said about the Kingdom of Heaven and replaces it with pie-in-the-sky bullshit that allows people to continue living for themselves. And, that’s not biblical at all.