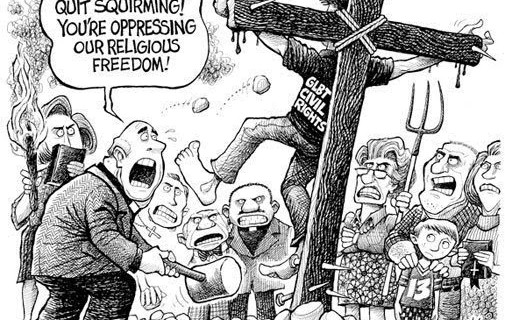 Every so often, we hear of a conservative celebrity making not-so-flattering statements about LGBTQ issues, sort of like Mike Huckabee did recently. The latest entrant in the “How Much Of My Foot Can I Fit In My Mouth” sweepstakes, Huckabee declared that forcing Christians to accept same-sex marriage is akin to telling Jews they have to serve “bacon-wrapped shrimp in their deli”. I’ll give the Huckster one thing: he has an amazing way with imagery and oratory. It’s too bad that most of that imagery and oratory has, at best, a nodding acquaintance with reality.

Huckabee made that comparison in an interview with CNN’s Dana Bash in support of his new book, “God, Guns, Grits, and Gravy”. Now, you might be thinking the title of this “tome” seems a little over the top even for a good Southern Baptist/Republican like Huckabee. And, you’d be right if we were talking about 2008 Mike Huckabee. But, since losing his shot at the Republican nomination to John McCain, Brother Mike has been busy burnishing his conservative credentials; mostly with a show on FoxNews. It appears that Huck learned what that bastion of “fair and balanced” media coverage had to teach very well, releasing a book that’s sure to appeal to his base of socially conservative Christians, especially southern ones. Is it coincidence that he did so at the perfect time to kickstart a 2016 run for the G.O.P. presidential nomination? Oh my, there I go being cynical again.

You see, Huckabee wants us to know he doesn’t hate gay people. Hell, he even has gay friends. But, it’s just not fair that businesses owned by good, God-fearing Christian people are being forced to compromise their beliefs by serving the gays. He’s looking for that mystical “third way”, saying: “I’d like to think there is room in America for people to disagree instead of screaming and shouting and having to shut their businesses down.” Yes, Mike, let’s agree to disagree about the humanity of those who are LGBT, just like we’ve agreed to disagree about the humanity of African-Americans (who have been fighting for equality for 350 years) and women (who, almost 100 years after the passage of the 19th Amendment, still deal with sexual discrimination). I mean, it’s worked so well for us in the past.

Huckabee’s assertions aside, I’m pretty sure there aren’t gangs of gay people roaming the countryside, forcing “Bible-believing” Christians (as if the rest of us are like Mormons or something) to “accept” same-sex marriage. Even if there were, how would they do that? Send Carson and the  boys from Queer Eye out, threatening to give straight, dudes makeovers at gunpoint if they don’t agree? Or maybe, a bunch of really butch lesbians to tell good Christian women that if they don’t get on board the marriage equality train they’ll give them a mullet, make them wear flannel and drive a Subaru? The idea that anyone is being forced to accept same-sex marriage is as ridiculous and offensive as the stereotypes I just invoked. Using that idea to play on people’s fears and advance your political fortunes is disgusting.

If you want to know the truth, whenever I hear someone saying this kind of thing, it reminds me of a petulant child, stomping his foot and yelling “But, I don’t want to!” Well, there are a lot of things I have to do as a Christian that I don’t want to do. Things like loving everyone (people can miserable bastards), sharing whatever I have with others (there not might be enough for me if I do), not obsessing about tomorrow (what will I do if I’m not worrying about the future?), but if I’m going to do this Christian thing the way it should be done, bitching about these things isn’t really an option.

Whether you like it or not, refusing to serve someone because of their sexual preference is discrimination and, as an American and a Christian, I have to believe that’s not kosher. So, what is a good conservative Christian to do? Maybe take a cue from the meme that says “Don’t like gay marriage? Then, don’t get gay married.” Don’t want to support same-sex marriage? Then, maybe you shouldn’t have a business where that might come up. At the very least you could try to grasp the fact that being held to the same standard as everyone isn’t persecution, it’s part of being a member of society.