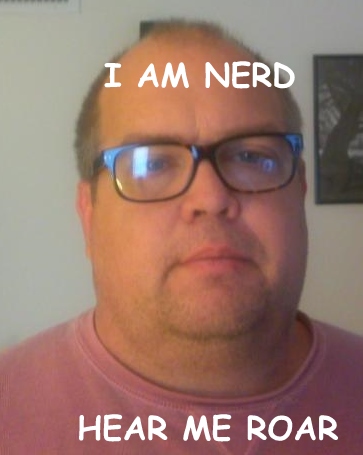 I have a deep, dark confession to make: I am…, a nerd. I realize this may come as a shock to most of you, but it’s true. I was born this way and I’m tired of living a lie. I am exactly the way God made me and I’m cool with that. You should be, too.

Oh sure, it’s no big deal to be openly nerdy today, what with all the pop culture icons who embrace their geeky side. But, as a young man growing up in the south, being a nerd was practically the kiss of death. Letting the wrong people see that side of you could result in getting your ass beat, being shoved into a locker, getting wedgies and all the other tortures the jocks and popular kids loved to dish out. So, I learned to hide it. I learned to talk sports (but not actually play, because my lack of ability would automatically peg me as a nerd), to hide the books I loved to read, to act macho and manly and laugh at anyone unfortunate enough not to pass.

My saving grace was a love of cars and some talent at working with my hands. These two things were a godsend, because it’s practically impossible to come off like a dork while waxing eloquent about small-block Chevrolets or swinging a hammer. Of course, the fact that I wasn’t a classic nerd didn’t hurt either. No one knew it at the time, but I have a mild case of ADD (and, by mild, I mean my attention span makes a gnat’s look expansive). Because of that, and my tendency to transpose numbers (something that makes balancing a checkbook interesting, let me tell you), I did not excel in math and science, getting grades in those subjects just good enough to graduate. In fact, my lack focus even interfered with classes I liked and caused me to fail English my senior year (damn grammar). These things came together and allowed me to pretend that I wasn’t really a nerd. But, it was a lie and one I even believed myself.

As I got older, I continued to seek out opportunities to prove I wasn’t a nerd. That led me into the fire service, first as a volunteer, then as a career firefighter. Like high school, the fire department isn’t a place where introverted, bookish people generally do well. It is a very macho, hands-on atmosphere; one where, if I wanted to survive, I had to learn to adapt. All those years hiding my geekiness paid off and not only did I survive, I succeeded beyond my wildest imagination. But, deep down, it was a hollow victory because I wasn’t being true to myself. And, I knew I was doing a disservice to nerds everywhere. I mean, if I’d been honest about who I was, think of the doors that could’ve opened for other nerds, geeks and dorks.

So, I’m coming out as an open and unrepentant nerd. People need to know what nerds already understand, that their social awkwardness doesn’t limit them; that everyone should be free to pursue their dreams no matter what clique they did or didn’t belong to in high school; that geeking out over something you love is one of the most freeing things you’ll ever know. In truth, nerds are some of the coolest people on the planet because they don’t give a crap what you think of them. What’s more cool than that?