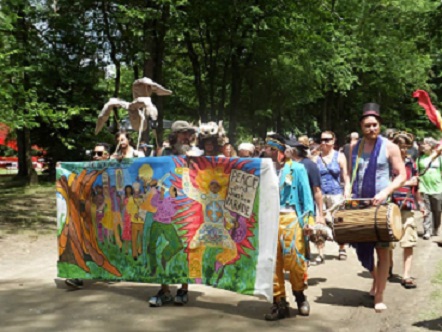 Well, another Wild Goose festival is in the books and, as much as I enjoyed it, I’m glad to be home. Well, sort of; today is shaping up to be a classic Monday. Last week, the kitchen electrical circuit in my house went out. Now, in most homes, this isn’t a big deal. But, I rent a 1950’s ranch from two old fellows who are loath to spend money on the place. So, instead of the usual breaker box, the house has an old style fuse box. Unfortunately, those can’t be repaired or replaced but must be updated. That’s being done today and I don’t have power while the electricians take care of business. If that’s not bad enough, my car developed an extremely irritating squeal on the trip, so I’m sitting in a coffee shop while it’s being worked on. Life is just big ol’ bowl of cherries some days.

Even those slings and arrows can’t bring me down too much (although, I haven’t gotten the bill for my auto repairs yet) because I’m still riding the high from the weekend. As I intimated last week, Wild Goose is as much a community as it is a festival. Granted, it’s not your usual community since it might be the only time most of us see each other face-to-face in a year’s time, but it is a community, nonetheless. That makes sense when you look at the definition of community. According to Dictionary.com (it’s my blog and I get to pick the definitions I like), community is ” a social, religious, occupational or other group sharing common characteristics or interests and perceived or perceiving itself as distinct in some respect from the larger society within which it exists.” Believe me, if you’ve ever been around this particular group of Jesus  hippies, you know this fits; especially the part about “distinct in some respect from the larger society within which it exists” (see photo above). While it’s not the kind of community most of us are familiar with, it is a community in the best sense of the word.

Community, when it’s done right, refreshes, revitalizes and rebuilds. It is a support system, a place of freedom and security. It influences, and is influenced by, our identity. Simply put, community sustains us and makes us what who and what we are. While it is possible to live outside of community, I’m not sure you could call that living; existing  , maybe, but not living.

This past weekend, spent in hinterlands of the Smoky Mountains with no internet or TV and weak cell signal (And I still couldn’t escape the damn World Cup coverage), has done all of those things for me. And, as it usually does, it has brought on a burst of creative energy I don’t get other places. Multiple topics for blog posts, ideas about expanding my reach, inspiration for future projects and other things that are a little harder to quantify. Let’s just say that Wild Goose gives my desire to create a Colbert-like bump. I have a sneaking suspicion I’m not alone in that.

There is a part of me that wishes for multiple Wild Goose festivals throughout the year. But then, maybe it’s so damn good because it only happens once a year. You know, absence makes the heart grow fonder and all that. Whatever. I’m already counting down to next year.