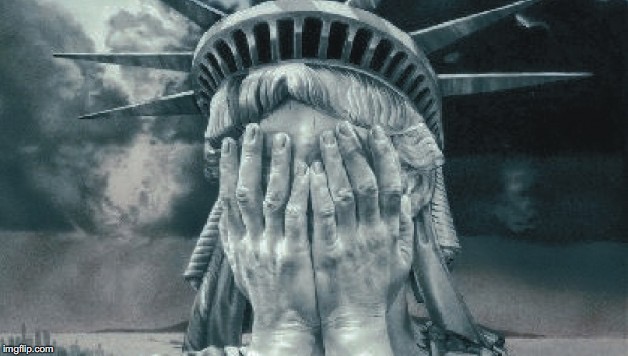 Hello, brothers and sisters. I know you haven’t heard from me in a while, but I’ve been a little busy. And, by “a little busy”, I mean “working my butt off to get some really mediocre grades this semester”.  But, recently, something so big happened that I just had to carve out some time and write about it.

What could possibly pull me out of my self-imposed exile and back into the blogosphere? President Trump’s budget proposal (I throw up in my mouth a little, every time I say that), that’s what. And, let me you, it is a doozy. It increases defense spending by 54% and slashes funding for almost every other part of the federal government, including all funding for arts and cultural agencies and the block grants that support Meals on Wheels and Head Start. Naturally, a few folks have their panties in a wad over this turn of events.

The real brouhaha started when, at a press conference yesterday, a reporter asked White House Budget Director Mick Mulvaney if the budget wasn’t “hard-hearted”. Mulvaney replied, “No, I don’t think so. In fact, I think it’s one of the most compassionate things we can do.” That’s right, beloved; a budget that cuts funding to programs that feed the elderly and underprivileged kids is “compassionate”.

Now, before we lose our collective mind over this, let’s look at Mulvaney’s reasoning. He told the press, who didn’t take his pronouncement very charitably, “You’re only focusing on half of the equation, you’re only focusing on recipients of the money. We’re trying to focus both on the recipients of the money and the folks who give us the money in the first place. And I think it’s fairly compassionate to go to them and say, ‘Look, we’re not going to ask you for your hard-earned money any more.’ ‘Single mom of two in Detroit, OK, give us your money.’ We’re not going to do that anymore … unless we can guarantee to you that that money is actually being used in a proper function, and I think that is about as compassionate as you can get.”  And, believe or not, I get where he’s coming from.

This budget is remarkably compassionate. I mean, sure, Trump’s budget will impose an 82% tax hike on a single parent making $34,000 a year. But, imagine how it will relieve the burden on the long-suffering and over-taxed 1% in this country. Seriously, who deserves a break more than the ultra-wealthy?

And, yes, this budget will eliminate programs that the single mom he mention probably relies on, like Head Start, PBS, and other silly, socialist fluff. But, come on, folks. Lord Dampnut has to get the money to build The Wall™ from somewhere. Especially, since Mexico can’t stop laughing at his claim that they’ll pay for it.

Besides he’s got to come up with that extra $54 billion he needs to beef up the world’s largest military. Yeah, I hear you, “We already spend more on the military than the next 8 countries combined.” Maybe. But, don’t we need to be ready in case shit pops off with the Russians? Okay, not the Russians; Uncle Vlad wouldn’t be happy about that. But, it is necessary. If only because he needs to make sure the military is equipped to protect him when the mob of screwed-over supporters arrives in D.C. with the pitchforks and torches.

Look, I know a lot of you are still pretty pissed about this budget. I get that. But, maybe you should take Mulvaney’s advice and look at both sides of the equation. There’s the “decent human being who wants to take care the least of these” side…, and, then there’s Trump’s. I’m sure you’ll see the light eventually.