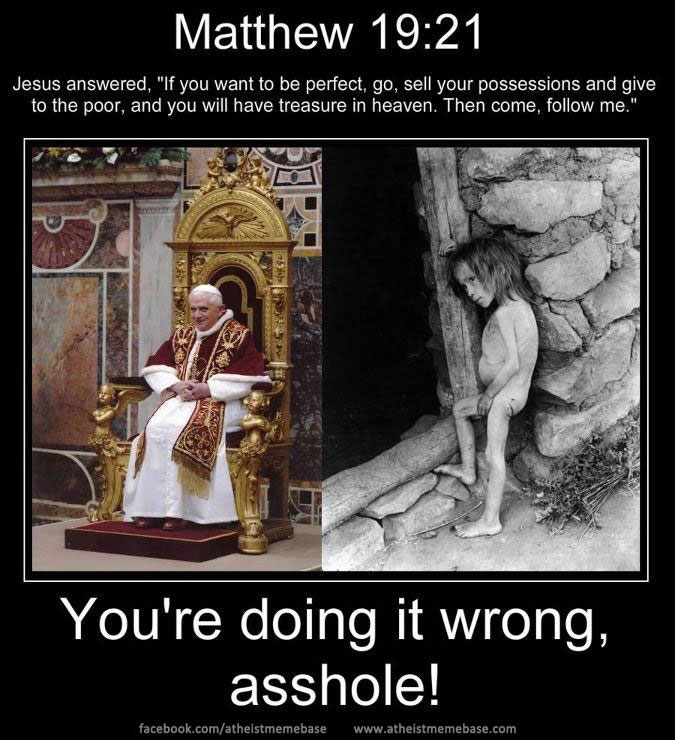 Recently, my brother sent me the following Facebook message:

“I was thinking about why there are so many assholes in Christianity. It occurred to me that Christ attracts broken people. Just because they accept grace doesn’t automatically make angels out of assholes. No excuse for behavior Jesus would cringe over. But it does explain some things. The question is what is the church doing about that? Not much that I see. But if you say you have a personal relationship with Jesus, then isn’t it your responsibility to grow closer to the standard set by Christ? Even if the church has its institutional head up its bureaucratic ass?”

He has a way with words, my brother. Not always pleasant, but a way nonetheless. Coarse language aside, though, what about his claim that Christianity is full of assholes and the Church doesn’t seem to be doing much about it?

Let’s start with the idea that there are “assholes” in Christianity. I know that may be offensive to some folks, but the truth is that Christian history is filled with intolerant, bigoted, mean-spirited people twisting the faith to their own ends; denying that fact doesn’t make it any less true. You need look no further than present-day Seattle, Washington for an example. Mark Driscoll (whose empire is falling apart in the wake of multiple uncomplimentary revelations) is pretty much the definition of the kind of “asshole” my brother was talking about. Much as you might hate to admit it, Christian do assholes exist.

So, there are unpleasant people who call themselves Christian. That’s not really a surprise, considering that they are, well, people. And, as Christopher Moore said so eloquently in The Stupidest Angel, “People generally suck.” They don’t magically become better when they accept grace, no matter what some folks might say. And, no, that’s not an excuse for behavior that makes Jesus cry. And, yes, you would think that a personal relationship with Jesus would make someone want to grow closer to the example set by the person they claim to follow. Hell, that’s what the whole “following” thing is about. But, for whatever reason, it doesn’t seem to work that way.

Then, he asks “what is the church doing about that?” He answers his own question with “Not much that I see”. And, when I look at the big picture, I can see why he might think that. The institutional church does, indeed, have its head up its bureaucratic ass and that’s probably the nicest thing that can be said about the situation because it implies an unconcious aspect to the way the Church has behaved throughout history instead of the active oppression and persecution that is too often the case. The thing is, I don’t believe “The Church” (the institutional one) is capable of influencing individuals in the way that he wishes they would.

In Forty Acres And A Goat, Will D. Campbell said all institutions, including religious ones, are inherently evil and eventually exist only to perpetuate the institution itself. Even though I finished the book less than a month ago, I can’t remember if he was talking about the Church when he said that, but it certainly fits. The Church is incapable of exerting the kind of influence that would bring these people closer to way of Jesus because it is run by these very people. And, people are loath to do things that will bring them pain. Or, make them change (which is often the same thing).

But, that doesn’t mean the small “c” church can’t do it. Or, that it isn’t already doing it. Real change doesn’t happen in institutions; it happens at much more personal and organic level. In individual congregations all over the world, Christians are living up to the name. They are feeding the hungry, housing the homeless, clothing the naked. They are loving their neighbors to the best of their ability and, in more than a few cases, telling the institution to go fuck itself when it gets in the way.

Does “the church have its institutional head up its bureaucratic ass?” Yes, it does. But, that doesn’t mean God’s church isn’t helping people “grow closer to the standard set by Christ”. It just means that a human construct is living up (or is that down?) to expectations.