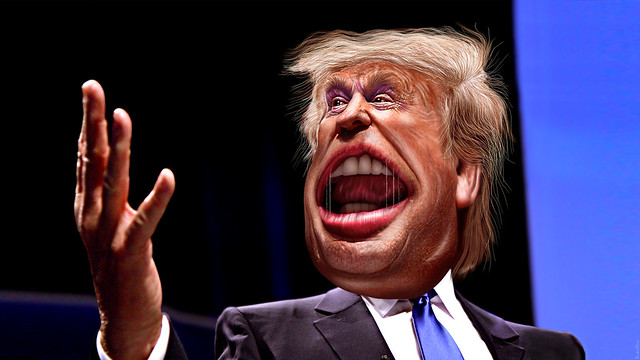 I know I’ve said this before, but being a smart-ass blogger who focuses on religion and the stupid things people say can be a very boom and bust proposition. For the last week or so, I’ve been casting about, looking for a suitable target at which to direct my snark and saying it’s been tough is an understatement. Pat Robertson’s been uncharacteristically quiet, Franklin Graham sounds like god-damn broken record and people just haven’t been saying crazy shit lately (on the religious front, anyway). All that changed yesterday morning when I stumbled across Charisma Magazine’s latest gem: “Prophecy: Donald Trump Shall Become the Trumpet.”

That’s right, beloved, the Almighty has tapped the Donald to be prophet and fulfill the “promises and plans” that God has for creation. Now, you might be wondering how an egotistical blowhard like Trump could ever be considered a prophet (I know I am). But, as author Jeremiah Johnson points out, God has often “chosen to accomplish His will through men and women who have ignored and rebelled against Him” and cites the story of Cyrus (the Persian king who returned the Jews to Israel) as proof. All righty, then.

So, how did Johnson come by this great revelation? God told it to him, that’s how. As he explains in the article, “I was in a time of prayer several weeks ago when God began to speak to me concerning the destiny of Donald Trump in America. The Holy Spirit spoke to me…” (I’m not including the rest of it her for reasons of brevity, but you really should click the link and read. It’s fucking hilarious). I don’t know about the rest of you, but whenever I hear someone claim that God has spoken to them, a couple of thoughts run through my mind: a) they’re full of shit or b) they’ve been sampling some of those mushrooms that helped John write Revelation. After reading this article, I’m leaning toward the latter in Johnson’s case.

Johnson stops short of advocating a Trump Presidency, though. Which is probably a good thing; I don’t know anyone who loves I love weird shit more than I do (as long as it remains in the abstract), but that would be a bridge to far even for me. Can you imagine this country led by the Donald? About the only things could get scarier would be if he made Franklin Graham top advisor. Fortunately, Jeremiah is only claiming prophet status for the Trumpster. Or, in this case, the Trumpet (Johnson actually wrote “Trump shall become My trumpet to the American people…”. I told you it was hilarious).

So, Trump as a prophet, huh? Let’s unpack that a little bit. If you look up “prophecy” in the dictionary, you’ll see that it’s defined as “a statement that something will happen in the future”, which is the way most of us understand it. According to Strong’s Concordance, however, “prophecy” means “the gift of communicating and enforcing revealed truth.” And, that’s the context we’re looking at here. But, considering that Trump has at best a nodding acquaintance with the truth, I’m wondering what the hell he could be communicating.

Look, if Trump is God’s prophet, what kind of fucked up message is he carrying? At the end of this “revelation”, Johnson claims that Holy Spirit told him, “Though many see the outward pride and arrogance, I have given him the tender heart of a father that wants to lend a helping hand to the poor and the needy, to the foreigner and the stranger.” Right, Trump wants to help “the foreigner and the stranger”. That’s why he called people immigrating from Mexico “rapists” and implied they were drug mules. Because stirring folks up against an already marginalized group of people is so helpful.

Of course, it could be God that is just fucking with us; you know, having a little fun at our expense. Whether that entails Johnson being right about this and Trump really is a prophetic voice (which I highly doubt) or if the Holy Spirit was just yanking Jeremiah with all that insane shit, I couldn’t say. Either way, it would be a pretty sick joke.

According to Terry Pratchett, “Revelation was a mushroom dream that belonged in the Apocrypha“, but the idea of Trump as a prophet isn’t a dream, it’s a fucking nightmare. Whatever substance Johnson may have ingested to come up with it.