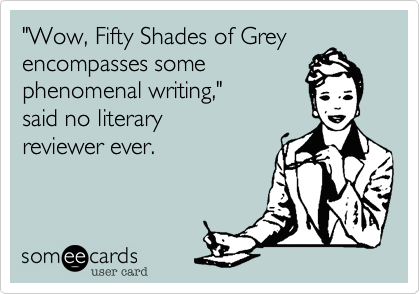 I’ll be honest, I haven’t read Fifty Shades of Grey and I don’t really want to. However, my problems stem not so much from the subject matter as the inane writing and questionable origin of the franchise. For those of you who haven’t heard of this series, Fifty Shades of Grey (henceforth shortened to FSOG) is the story of a innocent, naive young woman’s relationship with an older man whose sexual proclivities run to…, let’s say the kinkier side of things. Now, doesn’t that sound like great literature?

There are numerous problems with these books (there are 3 of them!), stock characters and a salacious storyline to cover up the dismal quality of the writing are just a couple. That’s not to say there aren’t concerns beyond conventional criticism, though. I’m talking about things like the abusive aspects of the relationship between Ana and Grey or the fact that yet another book/TV show/movie/pop song aimed at women is shallow, simple-minded dreck (evidently, the entertainment industry agrees with Renee Elmers). Look, it’s crap and we all know that. It is, however, reletively harmless crap. But, you wouldn’t think so if you listen to people like Matt Walsh and Jarrid Wilson.

For those of you not steeped in the Christian blogging world, Matt Walsh is a conservative Christian blogger who appears to be to the right of  The Gospel Coalition and Wilson is the pastor of a megachurch in Nashville. They’re just a couple of the folks who have issues with FSOG; the good ladies from PlanetMommyhood call it “a lie from the pit of Hell”. I understand that this “literary” phenomenon upsets these folks; hell, I even understand why. I don’t agree with them, but I understand where they’re coming from. But, what they don’t seem to realize is that they’re shooting themselves ( well. their cause, actually) in the foot.

What Walsh and other evangelical bloggers don’t seem to understand is that if they’d just leave it alone, this turd of a story might (with any luck) die a nice quiet death and we’d be done with it. But, the fact that someone like Matt Walsh doesn’t even like the idea of this movie makes me want to see it even though I know it will, in all likelihood, suck most heartily (Really. It’s fan fiction based on Twilight, for god’s sake. That’s a double-whammy of suckage). And, here’s the thing: I believe it’s safe to say a movie based on one of the best-selling pieces of mommy-porn in history doesn’t need any help with publicity.

Are there problems with Fifty Shades of Grey? Absolutely. Is it the major threat to our culture that Walsh, Wilson and the ladies at PlanetMommyhood think it is? No, it is not.  Maybe it does eat away at our collective morality with its depiction of abuse-as-love or the cynicism inherent in the way it attempts to appeal to women. But, major threat to our morality? No, major threats are things like our reaction to the humanitarian crisis on the border, our love affair with violence, or our embrace of materialism. These are the threats we should be worried about, the lies from the pit of Hell we should be fighting. Not some poorly written (and poorly acted and directed, if the trailer is any indication) bit of fluff that provides some harmless escapism for harried adults. In other words, ease the hell up, folks. It’s just a movie.