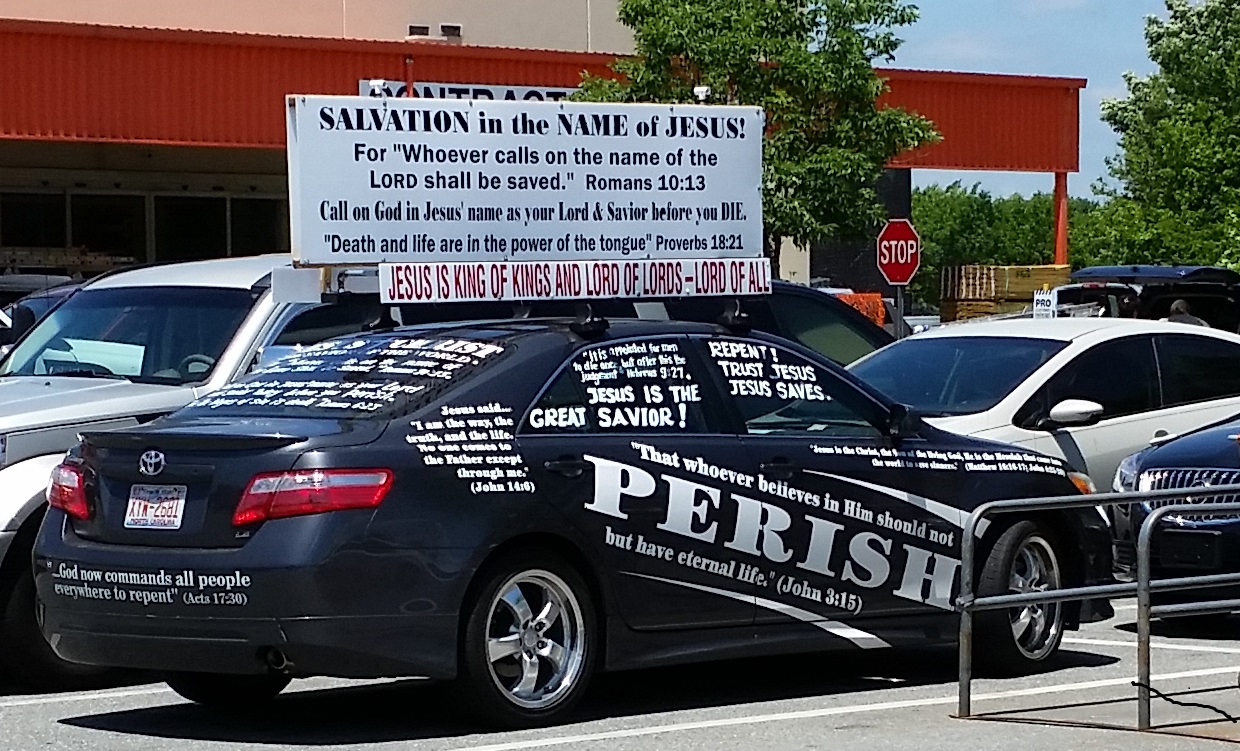 If you live in Greensboro, there is a distinct possibility that you’ve seen this car. Lest you think this is a crazy, one-off occurrence,  let me assure that it’s not. I took this photo at a certain home improvement center on S. Elm Street in Greensboro last fall. Then, just a few months ago, I was sitting in the drive-through at fine fried chicken emporium on the north side of town and a car pulled in and parked. It, too, was covered in “turn or burn” graffiti and when the occupants got out, they were wearing matching t-shirts with similar messages. Isn’t that nice? Nothing says “God is love” quite like “Believe in me or I’ll torture you for all eternity!”

These cars are rolling religious tracts; you know, those lovely little pamphlets that say “If you died tonight, do you know where you would go?” My friend, Jinx Barber, said his answer to that question is “I know exactly where I’m going. First to the medical examiners office, so my wife can see what drugs I wasn’t sharing with her. Then over to the mortuary where they will tan my Baphomet tattoo (which is a full back panel, thank you very much) into a giant canvas. Then they will quarter and cremate me so that I do not have to endure bodily resurrection and have to put up with a bunch of goody two shoes jerks for the rest of eternity.” Did I mention Jinx is a pastor? Yep, a youth pastor too.

Most people who engage in this sort of thing usually claim it’s biblical, citing such verses as Matthew 28:19-20, Acts 5:42 and 20:20. Sure, because Jesus was the original tract bomber (that’s a real thing, y’all) and Paul traveled around the Gentile world with a sandwich sign that said “Get saved or you will burn in hell for all eternity!”

I suppose I should take moment to point out that, yes, Jesus did say that we should spread the good news. And, that Paul spent the last years of his life doing this very thing. Of course, they did so by taking the time to build relationships with people, not shoving scary-ass little booklets into their hands or waving ridiculous signs telling them what vile disgusting sinners they are.  But, hey, we’re Americans and finding quicker, “better” ways to do stuff is what we do. So what if we’ve applied our assembly line ethos to Jesus’ message of hope for the downtrodden and, in the process, turned it into a glorified “get out of jail free” card?  We’ve got to get this shit done so we can kick back on a cloud with a halo and a harp and enjoy the fruits of our labor. Because, really, isn’t it all about us?