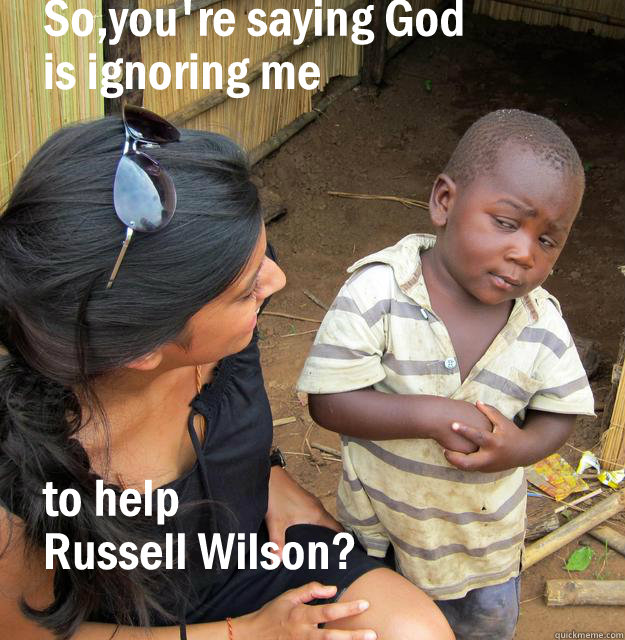 So, the American version of Roman poet Juvenal’s bread and circuses, aka the Superbowl, is upon us. Yes, friends, it’s time to engage in the annual bacchanalia of eating too much shitty food, enjoying a massively overhyped half-time show and watching a bunch of obscenely expensive commercials for a series of products that really won’t contribute to our lives in any meaningful way. Oh yeah, there will also be some kind of game going on in the background; football, I think. But, don’t quote me on that.

Sadly, that last statement is somewhat disingenuous and only included for comic effect. Between the uproar around the “dumbest sports controversy ever” and usual pre-game media blitz, how could I not be not be aware that a football game will be played this coming Sunday? That’s an exceedingly appropriate day, since preeminent theologian Russell Wilson informs us that God cares about football.

Wilson’s not alone: the Public Religion Research Institute tells us that 26 percent of Americans believe that God takes sides during sports contests. Yes, you read that correctly, beloved: 1 in 4 Americans believe God takes time out of what has to be an incredibly busy schedule to make sure the right team wins. I wonder how God determines which team is the “right” one? Is it which fans pray the hardest? Could it be the team with the most church-goers or which church those members attend((because there is a “right” and a “wrong” church, you know. If you don’t believe me, just ask any good Southern Baptist))? Or, maybe it’s which team God has money on((if God could find a bookie. I mean, seriously, who in their right mind would bet with the creator of the universe?)). I would say it’s based on which team (and their fans) actually love their neighbors, but that’s just crazy talk.

According to the study, lot of people believe it’s prayer that does the trick. But, that brings up the issue of why God would answer a New England fan’s prayer that their team wins over one from a Seahawks’ fan. Or the even thornier question of why God might answer frivolous prayers about a football game and ignore the pleas of someone praying for the recovery of a loved one? Or, why God can influence a sporting contest but can’t do anything about all the suffering in the world. Of course, such questions are utterly ridiculous because we all know that God cares more about rich, white people than anyone else.