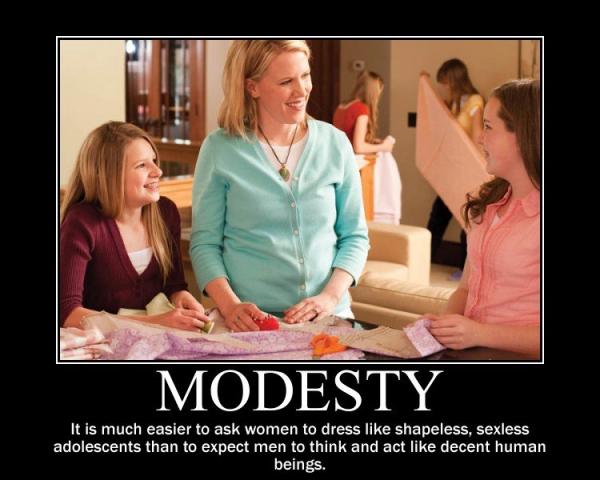 The world keeps on turning and, somehow, we’ve come back to the yoga pants conversation again. Before we go any further, let me state for the record, that I believe yoga pants are awesome. Think about it, we’re talking about something that makes women look good, but is also comfortable for them? Considering all the crap our sisters go through to look good for us, anything that can do that and not make them miserable might just rate up there with the wheel and fire as one of the greatest inventions known to humankind.

Unfortunately, not everyone agrees with me. Those perpetual blue-nosed finger wags known as Christians (mostly of the evangelical/fundamentalist nature) think yoga pants were invented by Satan to sway good Christian men off the path that God has laid out for them. Exactly what that path might be, I don’t know. But, I suspect it includes plenty of tithing and having lots of babies so Christianity can take over the world.

Into this inane conversation steps an article from Hilltop News, the Corban University student newspaper, titled “Yogo” or “no go”. In it,  reporter Bronte Brooke investigated the “yoga pants catastrophe” and its compatriot, the “leggings dilemma” (her words, not mine). Which makes me wonder if she’s serious or is just being a smart ass about the whole thing.

Specifically, Brooke was concerned with how Christian men felt about women wearing these pants and decided to talk a few fellows on campus. She specifically asked them to respond to this question: “Girls don’t need to dress modestly because it’s not their problem if a guy stumbles; it’s the guy’s problem,” a statement she has heard many women use “as an excuse to dress immodestly”. Again, this “serious or a smart ass” thing could go either way.

Unfortunately, there is no doubt about the responses to her queries. Three of the young men mentioned in the article sounded pretty much the same: “Please don’t tempt me with clothes that reveal your womanly attributes.” Andrew Kringlen said, “Yoga pants are great for keeping warm in workouts/wearing casually, Just put some shorts or something over the top please!”

Another, Christian Bohuslavizki (try saying that 3 times really fast), said, “It’s your right to wear what you want, but it also draws attention to areas that I bet you wouldn’t want people to look at regularly,” he said. “It reveals a lot due to its tightness and outside of workouts I would wear them with caution.” Why? Because, otherwise, you might be “tearing down” your brothers with your “freedom”.

And, there’s Bryson Gobel, who told Brooke, “Although I don’t feel I have the right to stop a girl if she wants to wear them wherever… I think guys and girls should respect their own bodies and sexual identities enough to not flaunt themselves.” Which is not quite as offensive as the previous statements. Now, before every woman reading this rises to eviscerate me for saying this wasn’t offensive, note that I said it was not quite as offensive. With a little luck, that qualification will buy me enough time to make a quick getaway.

My first response on reading this article was “Why the fuck do we have to keep having this conversation. More to the point, why the fuck won’t evangelical Christian men take some goddamn responsibility for their thoughts and/or actions?” It was also my second, third and fourth reactions, too. Things only got worse when I read this little gem from the aforementioned Mr. Kringlen:“Ladies, this is not a men’s or women’s issue: it’s a sexuality issue.” I practically yelled at the computer screen, “No, asshole, this is a “stop objectifying women issue”!

But, all is not lost, beloved. If you can make it past these infuriating statements, you will find some responses to Brooke’s question that aren’t too bad. One fellow said he didn’t think they were inappropriate, but should be “situational”. Well, no shit, Sherlock. I’m pretty sure women wearing these things to work, church or black tie dinners; anywhere else is fair game. And, while he said that men should be responsible for their own thoughts and actions, men and women should “support each other in their thoughts. So it’s best if women are careful for men’s sake, but that’s up to their own conscious.”

The last two respondents echoed my sentiments on yoga pants. One, John Mellison, gave me particular hope, saying “‘Modest is hottest,’ I’ve heard it oft said, that’s how the old saying goes. But in my humble, modest opinion, that isn’t related to clothes. In fact I am certain, convinced to a ‘t,’ that those of the female persuasion, ought only to wear whatever they wish, on any type of occasion.” See, ladies, there is hope for us men, after all.

In the closing paragraph to the article, Brooke removes all doubt about her seriousness with this statement: “In conclusion, I’d encourage women to be considerate of their Christian brothers. While some men may not be bothered by this attire, you never know who will be and as the saying goes, “better safe than sorry.” Really? Let me state again, for the record, that no one but me is responsible for my thoughts or actions. Not you, not your daughter, your sister, your mom or any other woman on the planet. And, saying anything else dimishes me as a human being.

Look, the conversation comes down to this: men need to understand that women are free human beings on this earth and they are not responsible for any shitty behavior in which we might choose to engage. Isn’t about time we figured that out? Damn, this shit makes my head hurt.