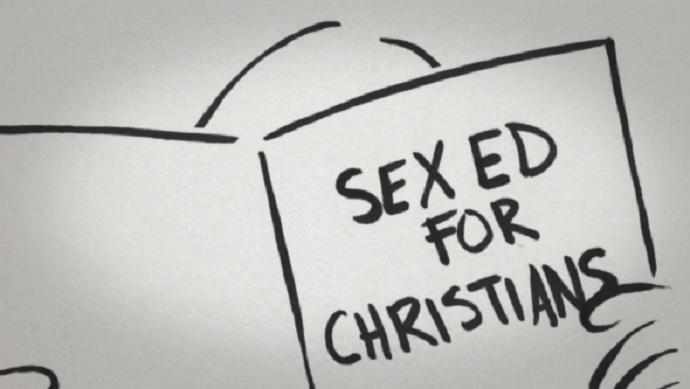 You know, after the walk down Creepy Street I took while researching Monday’s post about purity culture, I didn’t think I could find something worse. But, I did; much, much worse. A few hours after writing that post, I stumbled across a new site called Biblical Gender Roles. With a name like that, you know anything you find there will be great (and by “great”, I mean “really fucked up”). Today, I want to tell you about one of the articles I found there.

On Stephanie Drury’s “Stuff Christian Culture Likes” Facebook page I found a link to an article titled “8 steps to confront your wife’s sexual refusal” and thought, “Oh, this will be good”. And, Stephanie did not fail me: Within first few paragraphs, the author stated that he is constantly accused of condoning rape and says, in red highlighted text, that “I have not, nor would I EVER advocate for a husband to force himself physically upon his wife or to physically abuse her in any fashion.”  In fact, he has written a post just for all the “Rape Accusers”, titled “The Frustrated Feminist Wife” (why, that’s not condescending at all). Maybe it’s just me, but I think if you’re getting accused of something so much you have to write articles and post disclaimers saying you aren’t doing that, it may be time to rethink your message.

So, what is it that has people crying “RAPE”? According the author, one Larry Solomon (a pseudonym. We’ll get to that in a minute), husbands have a “right” to sex with their wives. . According to Solomon, a wife cannot flatly refuse her husband because that is a sin against God. But, not only should a fellow coerce his wife into giving up the goods whenever he wants , he shouldn’t feel bad about doing so: “A husband ought not to feel guilty for having sex with his wife when she is not in the mood if she yields, even grudgingly.” Don’t you love how he throws in that “if she yields” bit? It makes his words seem so much less rape-y.

Never fear, ladies, Brother Larry is also thinking about your needs because he discusses possibility that a husband might refuse to tickle his wife’s fancy. In fact, Solomon is so concerned about them that he dedicates a whopping 197 of the 4306 words of his article to this possibility. Of course, he says he’ll more fully explore the topic in a series on being a “godly” wife. Oh, I can’t wait.

In the past, I have rebutted posts like this point by point, but I’m going to have save that for another time. Mostly because I need a shower after reading the lead in; if I spend anymore time in the disgusting pool that passes for marital relations in Solomon’s world, I might never feel clean again. Suffice it to say, this list could serve as the definitive guide for being a manipulative, controlling asshole.

As I said earlier, “Larry Solomon” is a pseudonym. Why? I’ll let him explain:

“The reason I do not use my real name is the same reason that Christ hid himself from Jews: “Then took they up stones to cast at him: but Jesus hid himself, and went out of the temple, going through the midst of them, and so passed by.” – John 8:59 (KJV) It was not Christ’s time to die and it’s not my time to go public.”

After reading this article, I can understand why he hides his identity. If he showed his face in public after posting this shit, a good stoning would be getting off easy.