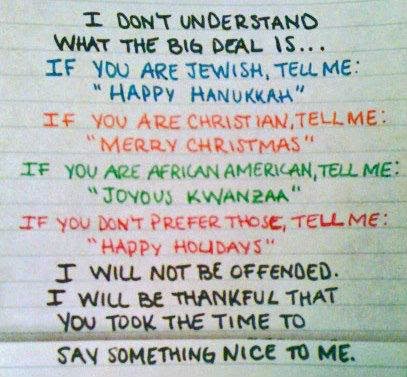 Ah, yes, Christmas is almost upon us((I almost said it was “the Christmas season is here”, but didn’t because pedantic liturgy nut would’ve felt the need to correct me with “It’s Advent! Christmas doesn’t start until Christmas Day.”)), which means some people have the their panties in a wad. Well, that’s not strictly true, since the people I’m talking about always seem to have their shorts in a knot. A better way to put it would be that, right now, their knickers are twisted for a different reason. And, what might that reason be? Folks saying “Happy Holidays” instead of “Merry Christmas”, that’s what.

Personally, I don’t care whether you say “Happy Holidays”, “Merry Christmas” or “Kiss my ass, you bastard”. Okay, I might take exception to being called a “bastard”, so strike that last one. But, I think you know what I mean. I do not understand folks getting so bent out of shape about this. You’re pissed because someone said something nice to you? What the fuck?

Of course, most of the people who are upset about the use of this phrase identify as Christians. They also tend to be more conservative and believe there is a War On Christmas and that Christians are being persecuted in this country (if you’re wondering whether you are, check out this handy-dandy flow chart). I won’t say they’re wrong, but I will say it’s funny that changing the date we celebrate Jesus’ birth to accommodate a Roman celebration, the addition of pagan traditions and rituals (see previous link) and the rampant consumerism (which is a funny way to celebrate the birth of a man who told his followers to not worry about food, drink, safety or shelter because God would provide all that) that characterizes Christmas these days isn’t an attack on Christmas, but a nice, heartfelt greeting is. Go figure.

One of the more interesting bits about “Happy Holidays” is that it significantly predates the modern-day culture wars of which it’s such a big part. Its use dates back at least as far as the 1860’s and was fairly common by the 1890’s. In other words, it was around way before the current (nonexistent) PC plot to eliminate Christianity from the United States.

Being the contrarian that I am, the uproar over “Happy Holidays” just makes me want to say it more than I already do. As a curmudgeon, it makes me feel like Dickens’ Ebenezer Scrooge who said “If I could work my will, every idiot who goes about with a ‘Merry Christmas’ on his lips should be boiled with his own pudding, and buried with a stake of holly through his heart.” Is that a little extreme? Yes, it is. It’s called hyperbole and all the cool kids use it.

Here’s the bottom line: if you want to wish me “Merry Christmas”, “Happy Holidays”, “Joyous Kwanzaa”, “Hanukkah Sameach”(Happy Hanukkah) or “Reasons Greetings” (for all you atheists out there), go ahead; I’m cool with all of them. All I ask is that you don’t be an ass about it. Okay?