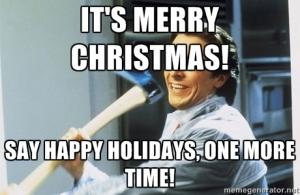 It’s that time of year again: Christmas, when the secular humanists, atheists and other equally Satanic unbelievers come out of the woodwork to attack this most holy of seasons. That’s right, beloved, the war on Christmas is hot again!

First, it was “Christian academic” (like those two words actually belong together) Diana Butler-Bass with her heretical piece Fox News’ War on Advent. As if there’s any such thing as this “Advent” business. Like I said last week, it’s just a commie plot to take away our freedom.

As if that wasn’t bad enough, Patheos blogger Ben Corey actually tried to make us believe that the term Xmas is rooted in Christian tradition. It’s not enough that he’s foisting such heresy on us, but he backs it up with (ugh) scholarship. Really? What do I care if a bunch of eggheads spout garbage like this and back it up with dates and facts? Look, if it’s not in the Bible, I don’t want to hear it. And, don’t try to tell me that the Bible never mentions the word “Christmas”, it’s in there. I’m not sure where, but it’s in there. It just has to be.

Corey’s nonsense is particularly bothersome because it will lead more and more people away from the traditional greeting of this season and to the one espoused by those dedicated to tearing down this great country: Happy Holidays. No true Christian could ever accept this phrase because it puts all those other  traditions on an equal footing with the one true faith and God knows we can’t have that. It would be the first step on a slippery slope that leads straight down to H-e-l-l. It would also mean that my faith doesn’t get top billing anymore and I’m not sure it’s strong enough to withstand that.

All I can say is, thank the Lord for good Christian soldiers like Bill O’Reilly. As Papa Bear said on his show recently, Hanukkah ended last Thursday and “there are no more holidays between then and Christmas Day”. Hey, I know there are holidays after Christmas, but this Bill O. we’re talking about here. You can’t expect a presence like this to be to be tied down with mere facts. Besides, those holidays don’t count for squat since they don’t involve wretched excess. And, as Jon Stewart says in the clip, “How can I enjoy my Christmas when I know that, somewhere, a little Jewish boy isn’t being forced to sing O, Little Town of Bethlehem.” Exactly.

I am so sick and tired of the PC police telling me what I can and can’t say. Oh, I can hear you now, saying they’re only pointing out what an ass I’m being when I force my beliefs on others. What, you think I don’t already know that? I do and I don’t appreciate being reminded of it. I just wish they’d mind their own business and stop persecuting me.

Happy Holidays??? It’s Merry Christmas, motherfuckers. Get used to it