So, this morning, I was working on a piece about some bat-shit craziness involving celebrity Christians and same-sex marriage. It was coming along really well and I thought, “Oh, this is going to be good.” Just as I was hitting my sarcastic stride, my social media feed began lighting up with news that the Supreme Court has ruled that it is now legal for all Americans, no matter their gender or sexual orientation, to marry the people they love. Which automatically meant whatever I was working on had to be put aside in favor of this bombshell. Fucking SCOTUS.

Don’t get me wrong, I am elated at this news. In fact, when I heard about it, my first thought was “Holy shitballs. Holy shitballs! HOLY SHITBALLS! Oh my god, you guys! They did it!” Okay, maybe not my first thought (see previous paragraph), but it was right up there. And, this is some momentous news, especially in light of what we’ve been dealing with lately. After years of fucking around, our country has finally done the right thing and decided to embrace a group of Americans that it has pushed to the margins for years. Okay, so maybe “embrace” is a  bit strong; how about “stop shitting on”, instead? Now, if we could just do the same for all the other people we treat like crap.

And I have to say I am amazed at the decision. Well, not the decision itself, but the writing. Not only did we get a ruling that moves one step closer to the equality that we claim as an American ideal, it does with moving prose, mostly in this one paragraph: 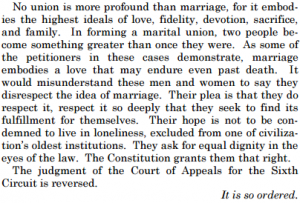 Since Scalia had written the dissent on the Obamacare ruling I was afraid we wouldn’t hear from him this time.  But, when I read that each of the 4 justices who ruled against wrote their own dissenting opinion, I was excited to see what everyone’s favorite conservative justice had to say; especially after that word salad on the other day. The man didn’t disappoint, calling today’s ruling a “judicial Putsch” and “threat to American democracy”. While there’s nothing so sublimely weird as “jiggery-pokery” or “pure applesauce” (from his ACA dissent), he did say that California isn’t a “genuine” Western state and compared Kennedy’s majority opinion to “the mystical aphorisms of the fortune cookie.” I’m telling you, the man has a way with words. Too bad that way sucks ass.

I don’t know about you, but I am god-damned tired of sanctimonious liberals and their attempts to sanitize our history. I’ve also had it with willfully fucking ignorant conservatives insisting that the Confederate flag has absolutely nothing to do with racism. So, in addition to being the right thing to do, this ruling from the Supreme Court is also a much-needed breath of fresh air. Seriously, I’m almost to the point of declaring “a plague o’ both your houses” and moving to a fucking cave in the woods, so I’m hoping the media will give the flag bullshit a rest for a couple of minutes and run something else into the ground.

Now, some of you might think this ruling means the fight over same-sex marriage is over and love has won. Oh, you poor deluded bastards. Do you actually believe that virulently anti-LGBTQ activists like Franklin Graham, Tony Perkins and Bryan Fischer are going to give up a cash cow like gay marriage? Not on your life. You only need to look at abortion to see that. It’s been 42 years since the Supremes ruled in favor of a woman’s right to choose and we’re still beat over the head with lurid tales about the murder of children and back door attempts by certain states to circumvent that decision. Oh no, my friends, this is not over. About the best we can hope for is that the dissent will die down to background noise while the rest of us move ahead.

There is one thing I’ll be awaiting with bated breath and that is the actions of people like Rick Scarborough, who said during a podcast promoting his Defend Marriage Pledge, “The preachers need to get out front, the leaders need to get out front, out front of these ordinary citizens and say, ‘Shoot me first'”, adding that “We are not going to bow, we are not going to bend, and if necessary, we will burn.” And, let’s not forget Glenn Beck’s “10,000 pastors” who are ready to “walk through a wall of fire, you know, and possible death.” Now, these pronouncements may sound brave and daring, but let’s be honest: they’re bullshit. You know, I know and they know that they’ll never have to put up; which means, unfortunately, that they’ll never shut up. But, seeing what crap they come up with next should be entertaining, if nothing else.

Okay, so I really don’t hate the Supreme Court. And, maybe, just maybe, the title to this article is slightly click-baitey. But, it got your attention, didn’t it? And, hopefully, you stuck around to the end here. If you did, I’m almost as happy about that as I am today’s ruling in favor of love. Shalom, y’all.