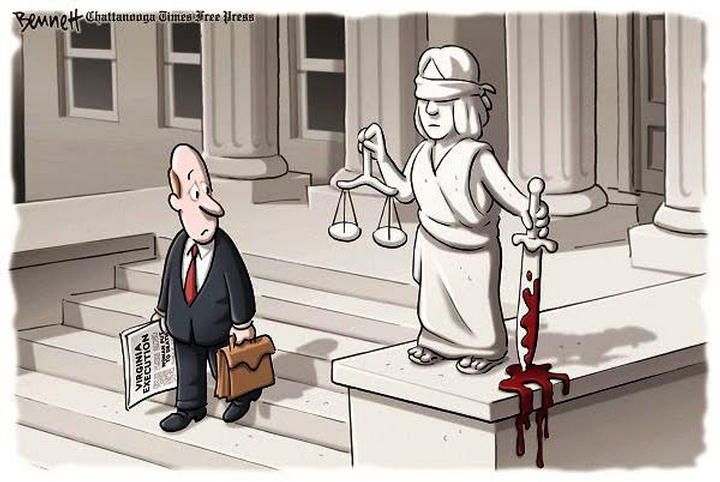 I first heard about Kelly Gissendaner when I saw an article about her last meal. Yes, you read that right, her “last meal”. You see, Gissendaner is set to be executed tonight for conspiring with her boyfriend to murder her husband. When her sentence is carried out, she will be the first woman to be executed by the state of Georgia in 59 years. Now, if you took the time to read the article that introduced me to Gissendaner, you know that her requested last meal is a large one. So large that The Daily Mail felt the need to report the number of calories it contained (about 4200), as if that makes any difference. As I was reading this, I thought “If someone has to “ride the lightning” (yeah, I know that refers to the electric chair, but “get the needle” isn’t very poetic), the least we can do is make they go to their maker with the taste of their favorite foods lingering on their tongue. Isn’t that the civilized thing to do?”

Unfortunately, doing the “civilized thing” seems to be the last thing on the state of Georgia’s mind. First and foremost seems to be ridding the world of Kelly Gissendaner’s presence permanently. As I said earlier, Gissendaner was convicted of plotting with her then-boyfriend, Gregory Owen, to murder her husband. They are so intent on killing this woman that Owen, the person who actually did the deed, was allowed to plead guilty and receive a life sentence (with the condition that he not seek parole for 25 years) in exchange for his testimony against Ms. Gissendaner. Interestingly, the jury had no problems deciding that Gissendaner should die while Owen lives on as a ward of the state. Probably because the prosecutor went after Kelly hammer and tongs, portraying Owen as a stooge and Gissendaner as the evil witch who manipulated him into such a heinous act. Which makes sense, really. If men start letting women slide for killing their husbands, getting a good night’s sleep is going to be awfully difficult. Why, we might even have to start treating women decently. God knows we can’t have that.

Lots of people are asking Georgia officials for clemency in Gissendaner’s case, but I suspect they’re barking up the wrong tree. Southerners believe that “he/she needed killing” is a perfectly valid reason to end someone’s life. And, despite the fact that the South is one of the most religious regions in the United States, many people down here see no contradiction whatsoever in supporting capital punishment and following a man who preached a message of grace and forgiveness and was himself executed by the state in a particularly brutal manner. Of course, we kill our offenders by lethal injection, which so much more humane than crucifixion. That makes everything okay.

When asked about forgiveness, Jesus told his followers to forgive 77 times (or “7 times 70, depending on which Bible you’re reading). No more how you interpret it, that’s a lot of forgiveness. Which means forgiveness was a pretty big deal to him. Now, I don’t hold any advanced degrees (hell, I don’t hold any degrees. But, I’m working on that), but it doesn’t take a rocket scientist to figure out that if you’re intent on killing someone, you haven’t forgiven them. And, forgiving someone after they’re dead isn’t possible. Okay, technically, it is; but I’m not sure it makes a lot of difference at that point. And, as for grace? Well, it’s pretty much the same deal. I’d say grace has been thrown under the bus when you’re actively seeking someone’s death.

Maybe it’s part of the human condition, or maybe, it’s because of original sin, but it seems to me that a lot of folks want grace for themselves and justice for everyone else.  And, I’m pretty sure that’s not how it’s supposed to work.