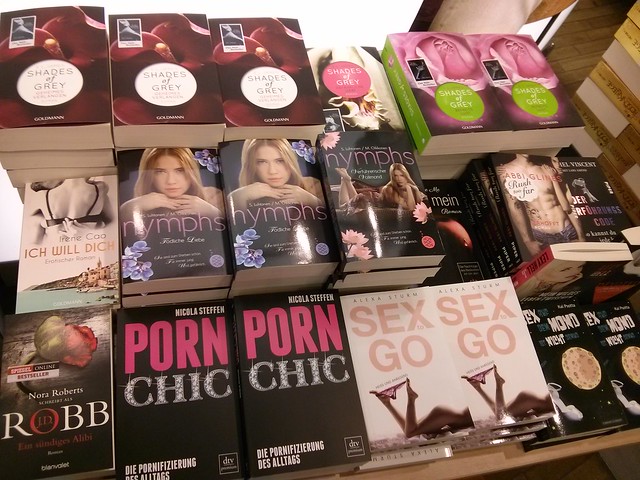 Sometime in the last year or so, I started getting email notifications from Relevant magazine with links to current stories appearing in the print version. You’re probably wondering why a somewhat progressive, curmudgeonly old fart like me hasn’t unsubscribed from a Christian magazine aimed at millenials; especially one that has ties to Strang Communications, publisher of Charisma magazine. There are two reasons for that. The first is that some of the articles are actually interesting and, at times, even helpful. The second? Well, the second is that, every now and then, they provide excellent blog fodder. Like today, for instance.

As I started reading, the article came off as an even-handed discussion of the sexualization of our society. The author says that this phenomenon isn’t confined to movies like “Fifty Shades of Grey” and “Magic Mike XXL”, it has “been slowly seeping into popular books, television shows and even commercials for quite some time now.” And, she’s right; if you’re doubt, watch a Hardee’s/Carl’s Jr. commercial and you’ll see what she’s talking about. But, that doesn’t last long, as the piece quickly devolves into yet the standard evangelical idea about sex; i.e. that it’s really, really bad and women shouldn’t even acknowledge their sexuality, much less explore and enjoy it. Except, of course, within the confines of a marriage that is traditional and church-approved. And, by “a traditional and church-approved”, I mean “to a dude”.

It’s not a total loss, however, because she does talk about objectification. Unfortunately, Fileta seems to think that couple of movies, some racy commercials and television programs that show a guy’s butt now and then are somehow equal to the years that women have sexually objectified. Seriously? That doesn’t even begin to take into account the misogyny that permeates the porn industry (one director, without a trace of irony, consistently refers to women as “animals”) or the fact that the objectification of men is relatively new phenomenon, while we’ve been reducing women to the sum of the private parts for millenia. But, hey, at least we’re talking about it, right?

But, the real problem is that this article tries to sound like an even-handed discussion about the double-standard so ingrained in our attitudes about sex (see description offered two paragraphs ago), but it actually perpetuates it. The entire thrust of the piece is that women are still the same sinful creatures that brought about The Fall. You know, that whole Eve feeding Adam the “apple” thing. Right, because men wouldn’t give a shit about sex if women weren’t always hanging around, being all tempting and shit.

So, to answer the question posed in the title of this post, is the sexual double standard crumbling? No, it’s not. In all too many quarters, it’s still alive and kicking.