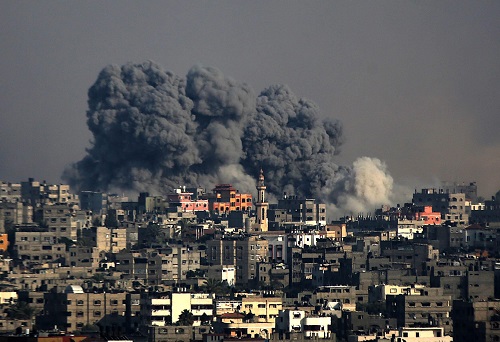 In the past month, Israel and Hamas have gone at each other hammer and tongs with Hamas getting the worst of it. Actually, that’s not true; the Palestinian people in Gaza have gotten the worst of it. Their homes have been destroyed, their family members killed, maimed and wounded, their country reduced to smoking rubble. There have multiple cease fires, each one broken by one side or the other with recriminations about who did what flying hot and heavy. Fortunately, the latest one has held for two whole days. Sadly enough, that’s a record in this latest melee. The previous truce, also set to last 3 days, made it all of 2 hours before someone started shooting again. And, of course, each side blamed the other and the bullshit was knee-deep.

But, the combatants aren’t the only ones pushing an agenda; the dialogue is flying hot and heavy here in the U. S., too. Early on, most of the talk came from left-leaning sources and folks who were disturbed by Israel’s actions and how they impacted the Palestinians. Lately, however, the right is speaking up on behalf of Israel, informing us that Hamas is a terrorist organization, that Israel’s current military actions are in keeping with its right to defend itself, that disagreeing with Israel is ignorant and anti-semitic, etc. And, as you can see, they have been rather vehement in their support. Which makes me wonder why they feel so strongly about this?

While the American right-wing doesn’t seem to have many qualms when it comes waging war, their record is a little…, let’s say, spotty. In the last 20 years, they have beaten the drum loudly for wars in Kuwait, Iraq and Afghanistan. They were, however, more than a little reticent about fighting in Bosnia and Somalia and ignored the genocides in Rwanda and Darfur. Much of that can be traced back to the fact that the places they didn’t want to fight don’t have something we want, while the conflicts they supported do. Except for Afghanistan, but they helped Osama Bin Laden. And, there’s the connection.

In the opening years of the 21st century, the U. S. was attacked by terrorists on our own soil. Our response? We invaded a sovriegn nation, unseating the duly elected government and destroying the infrastructure of that country. Early last month, Israel was attacked by terrorists (I know some of you may disagree with that, but hang on; I’m making a point). Their response? They invaded Gaza, effectively unseating the duly elected government and destroying that region’s infrastructure. The right has no choice but to vociferously support Israel’s actions because, if they don’t, they effectively indict our own as criminal.

But, really, the question shouldn’t be why do we support Israel so strongly, it should be why do we feel it’s right to use violence to achieve our aims? The answer, in my opinion, is that Americans are in love with violence. More precisely, they are in love with the idea that “that violence saves, that war brings peace, that might makes right.” That quotation comes from Walter Wink’s essay The Myth of Redemptive Violence. In a nutshell, Wink says “the Myth of Redemptive Violence is the story of the victory of order over chaos
by means of violence.” He also says it’s ” the simplest, laziest, most exciting, uncomplicated, irrational, and primitive depiction of evil the world has even known.” After seeing what’s happened to the people in Gaza, I have to agree.