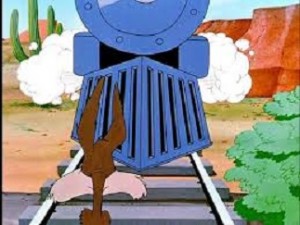 By “that time of year”, I mean The Wild Goose Festival is almost here. And, the closer it gets, the more I feel like Wile E. Coyote when he saw an a train bearing down on him. It’s not that I don’t like Wild Goose, it’s an amazing time. But, my preparation ritual for any trip is to put things off as long as possible and then run around like a chicken with its head cut off, trying to pull things together at the last possible minute. That, however, is beside the point; which is that I love spending the weekend in the woods with a bunch weird-ass Jesus hippies.

You wouldn’t think that to be the case. Wild Goose has a very touchy-feely, drum-circle-y (without any actual drum circles…, that I know of), peacenik vibe and that’s not me. It also has an intense focus on social and economic justice and that is me. Don’t get me wrong though, I don’t see that stuff I mentioned as being “not me” as bad; the truth is, I wish those things were “me”. At least a little bit, anyway.

I wish it was because I think the people who live in that touchy-feely, drum circle-y, peacenik vibe are able to let go and experience freedom that escapes me, an introvert who’s constantly worried that people are looking at (and judging) him. One of the reasons I love Wild Goose is because, if only for a weekend, I get a taste of what that freedom might feel like.

In his book, Naked Spirituality, Brian McLaren talks about Temporary Autonomous Zones. TAZ’s are places that evade official structures of control; like Woodstock or Burning Man, for example. Is Wild Goose a Christian Burning Man or Woodstock? Maybe; I don’t know since I’ve never been to Burning Man and I was all of 8 years old in 1969. Not to mention that I have no idea what a Christian Burning Man look like. But, it is definitely a place where those “normal patterns of hegemony and homogeneity are broken” ((Brian McLaren, Naked Spirituality, page 65)). Because I can (almost) stop worrying about being watched and judged, Wild Goose is a TAZ for me.

For all its weirdness, The Wild Goose Festival is one of the most spiritual places I’ve ever been. Often, I hear people talk about the awe they feel in the grand cathedrals of the world and while I do find them impressive, it’s usually more from a historical or architectural standpoint than a spiritual one. As I’ve said before, deep spiritual experiences have been…, elusive in my life and what few I have encountered weren’t in church, be it a grand cathedral or modest country church. Most of them happened outside in the midst of God’s creation. For my money, a pile of bricks and mortar, stonework and joinery, no matter how impressive it might be, can compete with the spiritual presence found in nature. The fact that the festival moved to Hot Springs Resort and Spa on the magnificent French Broad River last year expands the possibility of that happening for me.

The festival kicks off in 8 days and if you’ve been thinking about going, you should. The same goes if you’ve never heard of it but are intrigued by what I’ve said here; it is an experience not to be missed. Of course, if you’ve already decided to go, you know that. Hopefully, I’ll see you there.