Said No Thinking Person Ever

I would say that everyone knows about Tuesday’s train derailment, but I found out yesterday that’s not true. Two different people had no idea what the hell I was talking about when I mentioned it. So, I guess a short recap is in order: Amtrak’s Northeast Regional Number 188, carrying 238 passengers and 5 crew members, was passing through Philadelphia on Tuesday, May 12, when it went off the rails around 9:30 pm. It’s likely that speed played a part, as the train was traveling as much as 56 mph over the posted limit for that stretch. More than 200 people were treated for injuries, with 11 in critical condition and 8 dead. Even your lucky rocket ship underpants won’t help you get through something like that.

We now know why that train went off the tracks and it wasn’t because Congress (and by “Congress”, I mean “Republicans”) refuses to spend money on infrastructure. And, it wasn’t because the system that could have prevented this accident wasn’t installed on the most heavily traveled stretch of tracks in the country (why? See previous sentence). So, what did cause this disaster? The gays, that’s what. No, their gayness didn’t create a force field that interfered with the positive train control system, nor did a group of militant gay activists sabotage the tracks by painting rainbows on them. It’s not even that God decided to punish America for allowing the “abomination” of same-sex marriage (no one’s said that yet, but it is early). The true culprit? The engineer, that’s who.

It seems that Chuck C. Johnson (a fellow whom Wonkette has named “New Stupidest Man on the Internet”) broke the “news” that engineer Brandon Bostian “is a gay activist who previously worked at Target as a cashier.” Because everyone knows that your sexual orientation directly affects your professional competence. Even worse, Bostian is a “gay activist” (i.e., a gay person with the nerve to demand equal rights). But, Chuck’s only doing his duty as a “journalist”, as he points out in this tweet: 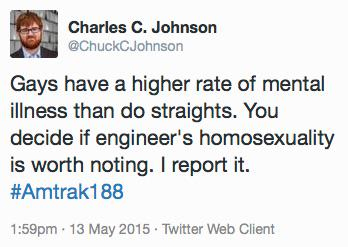 And, if Bostian’s sex life isn’t enough to  show his culpability in the accident, there’s the fact that he was a cashier at Target. Oh…My…God! We must demand that the people who assume such positions of responsibility have never held menial positions like cashier, fast-food worker or stocker; you know, the jobs that, increasingly, are the only ones available to many Americans. Thank God for brave bloggers like Johnson. Without them, how we would know which bullshit angle of a story to focus on so we can deny the actual facts?

It’s not just  bloggers/websites like Johnson and WorldNetDaily who feel that Bostian’s orientation is relevant to this discussion, actual news outlets are chiming in. Okay, so maybe a radio program sponsored by the American Family Association isn’t exactly what you’d call an “actual new outlet”, but Sandy Rios (whose program I’m referencing here) is a FoxNews contributor. Hmm, that doesn’t help my case as much I thought would. Anyway, on her May 14th broadcast, Rios said that Bostian’s sexual orientation might have been “a factor” in the crash. She started out by commenting “Now I am not saying, I am not inferring to those of you that are gay rights activists and like to monitor this show, I’m not inferring that this accident happened because he was gay, but I do think it’s an interesting part of the story and you can bet it would be edited out.” Then, she suggested that he could have been “going through some confusion that has to do with the very core of who they are.” Translation: “I don’t want to say that it happened because he was gay, but it probably happened because he was gay.” Sure, it did.

Interestingly, at least one of the participants (Rios) in this little “smear the queer” campaign claims to be a Christian. Not only that, she works for an organization that calls itself “Christian”: the American Family Association.  Maybe it’s just me, but that seems a bit odd when you consider that Christians follow a man that stood up for people who had been marginalized by dominant culture. I’m sure it’s all just a big misunderstanding…, on my part, of course. Because it sounds to me like someone is pushing a false narrative in order to advance their own agenda. But,that’s a tactic of “gay activists” and God-fearing conservatives like Rios and Johnson would never do something like that.