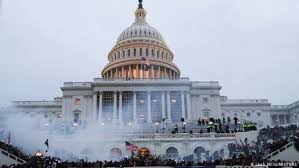 This past Wednesday, I saw a Confederate flag being paraded through the United States Capitol building. I’ve got to tell you, that’s something I never thought I’d see. Now, I’m not so naïve as to think people wouldn’t stoop low enough to display the flag of a failed state that made war on the United States inside a space that should sacred to all of us. I didn’t expect it because I thought the seat of our government had the kind of security apparatus that was at least on par with the razor blade case at Walgreens. Turns out, I was wrong.

In case you’ve been under a rock for the past few days (like some of these folks), I’m referring to the failed coup attempt perpetrated by followers and enablers of Donald Trump, aka the worst president in American history (and that’s the last time I’ll use that word in conjunction with his name). On Wednesday, January 6, 2021, these rocket scientists stormed the Capitol Building as a joint session of Congress finalized Joe Biden and Kamala Harris’ election as president and vice-president. The mob, egged on by multiple speakers at an earlier rally (that included Trump and his mouthpiece Rudy Giuliani), labored under the delusion that they could “stop the steal” with this action. They were thwarted by quick-thinking Senate aides who got the boxes containing each state’s ballots out of the building before the rioters could get there hands on them, thus preserving democracy. Like most of you, I’ve spent the last two days processing this insanity and thought I’d share what conclusions I’ve come up with.

Did he “cross the Rubicon”?

For the past few weeks, Trump followers have been urging him to heed disgraced former national security advisor Michael Flynn’s advice and “cross the Rubicon” by invoking martial law and “rerunning” the election. And, as more and more information that comes to light about Wednesday’s insurrection, it beginning to look like he did. Fiona Hill, another former national security advisor, told The Daily Beast that “The president was trying to stage a coup,” but was thwarted by lack of military involvement. She goes on to say that since he was prevented from using the military, he decided to go with the civilian option. At the rally I mentioned earlier, he told the crowd,

And, Giuliani called for “trial by combat”. Now, I’m no attorney but, considering the events that followed those inflammatory words, I can’t see them as anything other than incitement to riot. Add in the fact that federal agencies (DOD, Homeland Security, etc.) were exceedingly slow to respond and neighboring states were prevented from responding for an extended time, the whole thing begins to look like an active, concerted effort by the Trump administration to overthrow the United States government. And that, my friends, is treason.

He wasn’t alone though

Amazingly, even after all of this had occurred, 6 Republican Senators and 120 Republican representatives still contested the affirmation of Joe Biden as president. Now, I just spent several paragraphs laying out how this revolt was Trump’s fault. But that’s only half true because these senators and representatives were fully on board with the attempt to throw out the votes of millions of Americans in order to allow an authoritarian thug to remain in power. I think the takeaway here is that many of them will be up for reelection in 2 years. We all need to remember how they supported a treasonous attempt to toss out a democratic tradition that forms the bedrock of our nation. And vote accordingly.

Trump responds to the insurrection… sort of

It took quite a while for 45 to finally address what was going on at the Capitol. In part, I’m guessing because aides reported that he was too busy gleefully watching it all unfold. Finally, somewhere around 2 hours into the uprising, Trump finally addressed the nation… via a pre-recorded video posted to Twitter. That’s not a joke, but video was. He spent more time pushing the election fraud garbage that led to the attack than he did condemning the violence. To make matters worse, he told them, “We love you. You’re very special. … I know how you feel.” It should be noted that he only responded after Biden came out and spoke the way we expect a president to speak. If there’s one thing the Traitor-in-chief can’t stand, it’s being one upped.

His supporters who stayed home? Not so much

In spite of the fact that their Dear Leader was personally responsible for what happened in D.C. Wednesday, his supporters who weren’t on the scene where remarkably quiet. I mean, for the longest time, we didn’t hear a peep out of a crowd that has never shied from “owning the libs” and telling us “snowflakes” to “suck it up, buttercup”. At the time, I wondered if they were still proud of him but quickly realized their silence in the face of insurrection on his behalf spoke louder than any words.

Until they didn’t anymore

That silence didn’t last, though. Before the night was out, Trump supporters— including (semi)legitimate news outlets and members of Congress— were claiming that the mess in D.C. was instigated by Antifa infiltrators. This in spite of the fact that many perpetrators posted selfies and videos of themselves in the act! How do you respond to lunacy like that?

Over the last couple of days, Trump staffers and cabinet members are resigning in droves and his support in Congress is drying up. Wednesday evening, Trump’s main Senate cheerleader, Lindsey Graham called it quits with Donald, saying “…count me out. Enough is enough.” I can’t speak for anyone else, but I see this as a case of “too little, too late”. Don’t get me wrong, I am glad to see there’s a line these people just couldn’t cross. At the same time, I’m appalled that line turned attempting a coup by inciting violent insurrection.

This may be the dumbest coup ever attempted but it’s still a coup. And, while these particular perpetrators are morons, there are people watching and taking notes who aren’t. We need to send a very clear, unmistakable message about what happens to people who try to overthrow our government. The best way to do that is to ensuree some tough consequences for everyone involved. And by “tough consequences”, I mean arrests, convictions, and sentences with real teeth. I’m no fan of capital punishment, but in this instance, I’m in favor of bringing back public executions for those convicted of treason. But, honestly, I don’t see that happening. At most, these idiots will get a slap on the wrist and we’ll go back to business as usual. Which, apparently, is the American way.