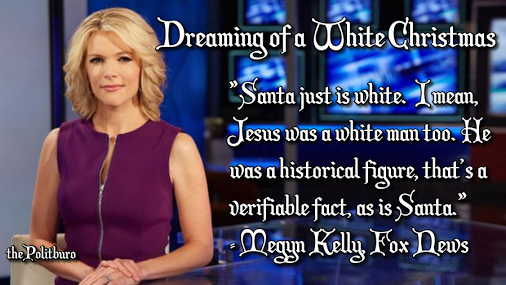 Well, the heathens are at it again. The latest shot fired in the war on Christmas involves Santa Claus and Jesus. Now, as much as I hate having that fat pagan’s name mentioned in the same sentence as our Lord and Savior Jesus Christ, I can’t let this attack go by without comment.

What am I ranting about this time, you ask? Last week, during a panel discussion on FoxNews’ The Kelly File, the topic was a Slate article that suggested that maybe  Santa Claus didn’t have to be white. During the discussion, Megyn Kelly stated that both Santa and Jesus were white men and liberals everywhere lost their minds. Meanwhile, good, God-fearing conservatives were thinking (or saying) “Damn right they were…, or are…, or whatever”. I’m sorry, but this PC stuff is just ridiculous. What difference does it make that Santa is white? Oh, you say it marginalizes colored children? Well, maybe the little curtain climbers should go back where they came from and quit screwing up my country!

As if it wasn’t bad enough that we had to be exposed to this nonsense in the first place, some bleeding heart liberal had to come along and start yapping  about the “fact” that, as a Jewish man living in the Middle East in the first century, Jesus would most likely have had brown skin. Balderdash! Jesus was a white European and we know so because every available picture shows it to be true . You think I’m kidding? Go to Google Images, type in Jesus and see what comes up. Go ahead, I’ll wait…, see what I’m talking about? Plus, when Mark Burnett made his Bible mini-series, the dude playing Jesus was a white guy. And, as we all know, if it’s on TV, it must be true.Especially, when it’s on an educational network like The History Channel.

A couple of days later, Kelly took a few minutes on her show to answer her critics, saying “I offered a tongue-in-cheek message for any kids watching,” and “Humor is a part of what we try to bring to this show, but sometimes that is lost on the humorless.” I couldn’t agree more. Even though I hate any mention of the Hefty Heathen, she’s absolutely right that humor “is lost on the humorless”. That’s because liberals have no sense of humor whatsoever. It doesn’t take a rocket scientist to see that The Kelly File is so much funnier than The Daily Show or Jimmy Kimmel Live.

I keep hearing people talk about white privilege. So, it’s a privilege listening to all these damn minorities complain about everything? I think they need to consider what life would be like if we hadn’t brought them here as  non-compensated laborers a couple of hundred years ago. If wasn’t for white people, they’d still be living in Africa and would have never experienced the joy of living in a country blessed and ordained by God to be His “shining city on a hill“. You say they’re upset because their ancestors had to perform a little manual labor under less-than-perfect conditions and their parents lived under the perfectly fine separate but equal system that we all enjoyed? Well, I say, what ungrateful bunch of whiners. The plain truth is that these people ought to be thankful that we let them participate in Christmas at all and stop trying to change things to fit their culture. There’s only one culture in this country and it’s American. The sooner they understand this, the better off we’ll all be. By “we”, of course, I mean white people. Hey, it is our country, you know!