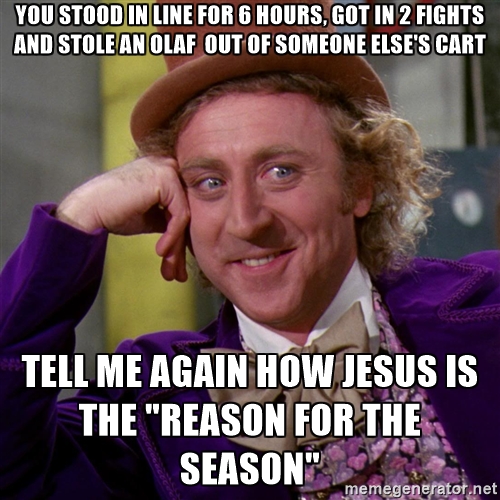 Actually, he’s kinda not, but you’re going to hear this a lot for the next few weeks.  Especially since the official propaganda apparatus of the Republican Party (Fox News) claims there”s a war on Christmas.  Plus, Rick Perry has decided that the culture wars give him the best shot at eating into Newt Gingrich’s lead for the Republican nomination and has mentioned this supposed “war” in one of his ads. Good times, my friends. Good times.

Why is Jesus the reason for the season? Good, conservative Christians will tell you it’s because he was born on December 25th. But, he wasn’t. Well, he probably wasn’t. The truth is we don’t really know when he was born.  In fact, more and more, people are thinking he probably wasn’t born in the winter. Wait, what?

There are several different ideas floating around about when, but all we really know is that he was born during the reign of Herod the Great; even the year is up for grabs.  The monk (Dennis the Short) who devised the whole BC/AD thing made a math error and Jesus was probably born between 4 and 6 BCE.  As for the day, who knows.  More to the point, who cares?  Does it really matter when he was born?  The important thing is what he did while he was here, right?

If I believe what I just said, why am I writing this piece?  Because, I’m tired of Fox and all the culture warriors beating us over the head with all these idealized images of a Christian Christmas and how the forces of evil (liberals) want to take it away from us.  I’m about get all sacrilegious here, so if questioning the status quo offends you, you might want to stop reading.  So, if Jesus isn’t the reason for the season, what is?  I think it depends on when you’re talking about.

The earliest record of a feast celebrating December 25th celebrating Christ’s birth is around 354 CE in the Chronology of 354, an illuminated manuscript from the 4th century.  While the Church floated all sorts of reasons for that, the truth is they were trying to pull people away from the various pagan winter festivals of the time.

The biggest of them, Saturnalia, was celebrated for a week terminating around our current Christmas day.  Saturnalia, like most pagan festivals, was a big drunken party/orgy, which made it much more appealing than a Christian feast.  To draw more people into the church (and get them celebrating Church festivals instead those nasty pagan ones), the Church moved Christmas to December 25th to coincide with Saturnalia.

For years, the celebration of Christmas remained a drunken party.  It was so bad that the Puritans, those models of moderation and tolerance, banned it in their colony.  Christmas didn’t get its current religious, family friendly face until the 1800’s with writers like Washington Irving.  Up until then, the reason for the season was to party and have a good time.

These days, the reason for the season seems to be stuff, or rather, getting stuff.  More and more, Christmas is assuming a materialistic demeanor that goes against everything Jesus stood for.  If Jesus was really the reason for the season, we wouldn’t be flocking to stores the day after Thanksgiving, causing riots in our mad dash to get the most for the least amount of money possible.  We wouldn’t buying things made in sweat shops or unsafe factories overseas.

What we would be doing is following the example of the person whose birthday we claim to be celebrating; looking after those less fortunate than us and working to end the systems that put made them less fortunate in the first place.  Until you actually do that, don’t tell me “Jesus is the reason for the season” because He’s not.  And, if there’s a “War on Christmas”  we’re all waging it.