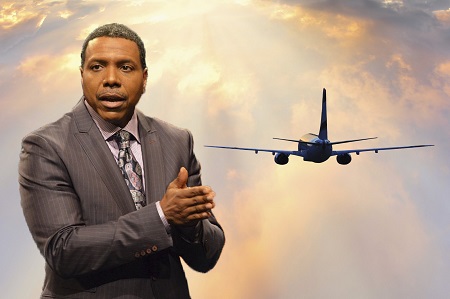 A couple of weeks ago, the head of World Changers Church International, the Right Reverend Creflo Dollar, asked his supporters to buy him a $65 million Gulfstream G650 jet. Yes, you read that right, a “pastor” (and I use that term loosely in Dollar’s case) has asked the general public to buy him an airplane. And, not just any airplane: the G650 is no rinky-dink puddle jumper, it’s the biggest, plushest, most expensive private jet money can buy. And, Dollar needs one to carry on his ministry. You can’t expect the man to “continue reaching a lost and dying world for the Lord Jesus Christ” in Piper Cub, you know.

‘Flo might not be as well-known as Joel Osteen, the modern face of prosperity gospel, but he is certainly one of the foremost American proponents of this theology. With a $2.5 million home, a garage full of cars (including more than one Rolls Royce) and a private jet, Dollar is the living embodiment of the “Name it and claim” doctrine which says if you’re a faithful Christian, God will reward you with all sorts of material goodies (translation from Christianese: “if you’re an expert grifter, you can too can bilk poor, gullible people out of their savings and live like a king”).

Here’s an interesting fact: Dollar’s net worth of $27 million is somewhere in the neighborhood of 200 times greater than the average in the area where he “conducts his ministry” (and by “conducts his ministry”, I mean “steals from those who can least afford it”). Perhaps just as interesting is something I mentioned in the previous paragraph: this new aircraft won’t be his first, it will replace an aging Gulfsteam. Now, you may be wondering why he needs a new jet when he already has one. Well, it seems that his current plane is getting a little long in the tooth, having been built in 1984 and purchased by the “ministry” in 1996, logging 4 million miles in the past 19 years. Plus, Dollar claims had engine trouble and once skidded off the runway due to other mechanical issues while his family was on board. We can’t have that, now can we?

Of course, some wags might say that if Dollar wants this flying New Orleans whorehouse, he should pony up and buy it himself. Puh-leeze, the man only has $27 million. What’s he supposed to do, take out a loan like normal people? And, Kirsten West Savali (the journalist who broke this story) thinks Dollar should fly commercial. What? But, that would mean rubbing shoulders with the people he’s been  shaking down all these years. And, if Dollar has to associate with the people he ministers to, they might begin to realize that, like all prosperity gospel preachers, he’s a full-of-shit con man who should be in jail, not behind a pulpit.

You might be wondering why I chose to share all this with you, since none of it’s really news anymore. Two reasons: 1) Dollar’s request for $65 million to buy a new jet is not really out of the ordinary when it comes to this racket-masquerading-as-theology; other practitioners, like Osteen and Kenneth Copeland, are just a little more circumspect in their extortion. And, 2) it seems the fund-raising page for the jet has disappeared due to a pretty significant social media backlash. For a short time, you could still donate via the ministry’s general funding page, but now, even that option is no longer available. Is that pushback a sign that people are finally getting tired of all this prosperity gospel/Word of Faith/name-it-and-claim-it bullshit? Only time will tell, but it is encouraging.