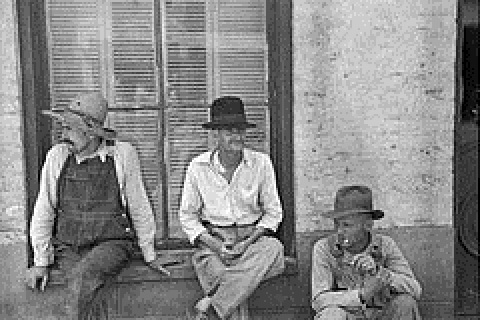 I have always loved the line that makes up today’s title. I believe it comes from an early 20th century southern politician (possibly James K. Vardaman of Mississippi, but don’t hold me to that). It’s a favorite because if ever there was a group that needed some love, it’s the rednecks. Another reason I love it is because I’m a bit of redneck myself. To be honest, I really don’t like to admit it so, whenever the subject comes up , I usually say “I’m not a redneck, but I do have redneck tendencies.” Is that dissembling? Probably, but sometimes that’s what it takes to get me through the day.

Let me take a minute to establish my bonafides: I come from redneck stock. I am the descendent of farmers, construction workers and mill hands, With one exception, my forebears were all blue-collar people. That exception was my great-grandfather, who was a doctor.  But, even The Doctor, as he is sometimes referred to in my family, wasn’t always a professional man. Before he went to medical school, my great-grandad had a number of jobs, being a shotgun rider on a stagecoach and selling fruit trees among them. Great-grandaddy was a redneck renaissance man if there ever was one.

Because of my roots, I am a huge defender of my fellow rednecks and often come to their defense when people call them “bigots” and other ugly names. But, in secret, my initial response to even seeing someone whose attire, speech or demeanor mark them as a redneck is not nice. Usually, it’s something along the lines of “Fucking redneck. My god, evolve, you stupid bastard”.

It doesn’t help that, in certain quarters, being a “redneck” is all the rage these days and leads to kids from the suburbs playing dress-up in camouflage and bib overalls. It’s more than a little irritating to see people pretending to be country folks when they’ve never even smelled a cow pie, much less stepped in one. That’s because it reduces my heritage to a commodity that some corporation is cashing in on. But, that’s not the real reason I’m less than kind to my peers and we all know it.

The real reason is that they remind of things I don’t like about myself. When I see these people, I’m really seeing myself and I project all the shitty things I think/say/believe onto them when I have no idea what they actually think/say/believe. It’s only made worse by the fact that most of the people I know who actually qualify as rednecks are evangelical/fundamentalist Christian, politically conservative (many of them support the Tea Party), blue-collar working people who are suspicious of higher education and are, even they don’t know/won’t admit it, more than a little bit racist. That’s an issue because, not that long ago, I was just like them.

These days, I identify as a progressive, both politically and religiously. But, sometimes, I feel like one of those suburban kids who wear camouflage and drive pick-up trucks, i.e. a pretender. Because, more often than I’d like to admit, I fall back into ways of thinking that are not progressive. It doesn’t last long and most of the time I don’t say any of that stuff out loud, but it’s still there and I don’t like myself very much when it happens. I may be a bad progressive in a lot of ways, but I’ve got the guilt/self-hate thing nailed. Hmm, maybe I’m not so bad at this progressive thing after all.