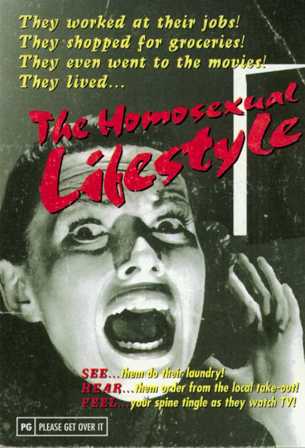 In August of last year, the darling of the progressive Christian world, John Pavlovitz, wrote a post titled Repeat After Me: “There is No Such Thing as a “Homosexual Lifestyle.”  What?!? No homosexual lifestyle? I find that hard to believe. I mean, if there’s no “homosexual lifestyle”, that means I’ve been an asshole for absolutely no reason whatsoever. That is a turn of events I just cannot accept.

Look, there are numerous places where the Bible plainly states homosexuality is a sin. Here are a few of those places:

Seriously, is this man, this “pastor”, trying to tell me that my deeply held religious belief about the homosexuals, based on a Bible verses that have been few proof-texted and cherry-picked within an inch of their life, is wrong? Really?

According to Pavlovitz, “We all have a gender identity and a sexual orientation and these things all fall along a vast and complicated continuum. It is this specific combination of both how we see ourselves and who we are drawn to that form this essential part of who we are.” Oh, come on, “gender identity” and “sexual orientation”? Everyone knows God created Adam and Eve, not Adam and Steve. And, Eve was always Eve, not Steve who decided he was Eve. No less an authority than the Southern Baptist Convention backs this up in their resolution “On Transgender Identity”. How could that many Baptists be wrong about something like this?

He also says that the Christians are holding onto “the prejudices and fears our faith inherited 3500 years ago when we didn’t know what we know now” and is “deliberately choosing to not know now; preferring religion to reality”. Well, of course we are. Otherwise we might have to change. And, if there’s one thing we don’t do very well, it’s change.

Look, the bottom line is that accepting homosexuality as innate and not a “lifestyle” is just another step onto the slippery slope that will ultimately lead Christians to live by the teachings of Jesus and start loving our neighbor and turning the other cheek. God only knows where that could lead.