A couple of months ago, I pretty much swore off stories about Franklin Graham. The guy is a broken record, bitching about the “gays”, the “muslims” and President Obama and I was approaching burnout where he’s concerned. That all changed this morning when I read this Facebook status he posted yesterday: 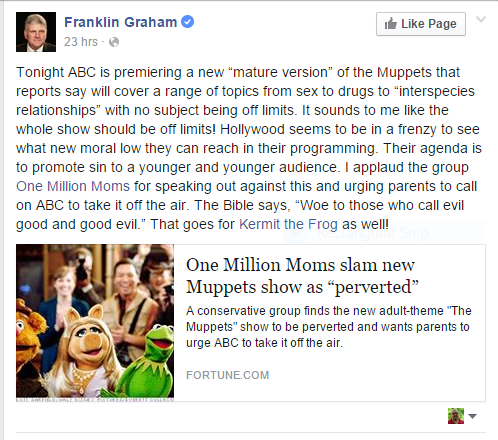 Yes, beloved, the Muppets are “promoting sin to a younger and younger audience” and Franklin is joining One Million Moms (don’t worry, we’ll get them in a minute) in “urging parents to call on ABC to take it off the air. Okay, then.

So, One Million Moms. For those of you who aren’t familiar with this organization, here’s a little background on them: Basically, they’re the email/fundraising arm of the lovely American Family Association, one of the more despicable anti-LBGT hate groups out there. They’re also one of the crazier ones, promoting such ideas as Christians are now just as oppressed as black folks were prior to the Civil Rights movement, equating people who are LGBT allies to Nazi’s, that the President hates white Americans because he authorized changing the name back to Denali and other insane rantings. But, their latest petition leaves all that (and Graham’s puny Facebook condemnation) in the dust: “The Muppets” is not suitable family fare because “…Kermit doesn’t wear pants”. I’ll pause for a minute and let you try to absorb that statement.

Okay, now that you have your brain wrapped around the fact that a group of adults who want to be taken seriously have their knickers in a twist because a puppet is not wearing pants (well, as much as you can, anyway), let’s look a little deeper into this insanity. Citing the fact that Kermit isn’t wearing any pants as part of the reason that the show isn’t fit for kids is…, let’s say “interesting”, since Kermit has never worn pants! Okay, so he did in a couple of movies and the occasional bit on the TV show, but the frog’s default setting is most definitely sans pants. Especially on Sesame Street. Guess that means one of the most revered kids shows of all time isn’t “suitable for family viewing.”

There are other complaints besides Kermit’s attire (or lack thereof): according to 1MM, “Miss Piggy came out as a pro-choice feminist during an MSNBC interview” which means “The puppet characters loved by kids in the 1970s and 1980s and beyond are now weighing in on abortion and promiscuity”. I suspect these two issues are more of a problem than Kermit’s pants. To be fair, though, the pants comment was probably an attempt at humor on the part of 1MM and, while it definitely succeeded, I don’t think the resultant laughs were the kind they were shooting for.

The Moms also ask “How many parents want to explain the punchline of sexually charged jokes to young children?” Which is a bit odd because Parker and I watched the first show last night and neither of us can remember anything “sexually charged” in the episode.  It’s almost as if they were watching an entirely different show. Oh wait, they didn’t watch it at all before weighing in. Seems to me actually viewing a show might be something you’d want to do before calling for its cancellation.

Perhaps the most interesting aspect of the entire thing is the lack of outrage at “interspecies relationships” (though it does get a mention in Graham’s FB tirade). Seriously, you’re torqued about a frog not wearing pants, but his thing for pigs isn’t a problem? Let me get this straight, Kermit’s relationship with Miss Piggy and Gonzo’s creepy chicken fetish were both “family friendly” and wouldn’t bring up uncomfortable questions, but jokes about where a bear might take a dump or Animal’s reluctance to go on the road with Imagine Dragons (“Too many women, too many towns“) cross the line? That’s one weird-ass line.

Both Graham and One Million Moms make a mistake that many of us have for quite a while:we see the Muppets and their shows/movies as children’s fare. That’s not been true since Kermit and company started working outside Sesame Street back in the 70’s. Oh sure, there have always been elements of the Muppets that kids enjoyed, but the humor was aimed squarely at adults. This new show drops all the pretenses and goes after its targeted audience directly. Considering that most young kids today have almost no connection to these characters, that’s actually pretty smart.

In their zeal to “protect” kids from such awful things as sex, bodily functions and actual issues facing us today, Graham and 1MM fail to live up to their calling: protecting kids from things they actually need to be protected from. You know, abuse, hunger, homelessness, poverty, etc. If these people want to get your panties in a wad about things that aren’t “family friendly”, seems like those might be a good place to start.