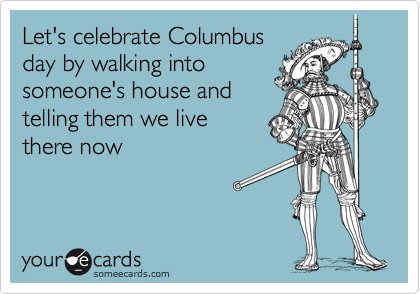 It appears the name of the holiday we’re presently celebrating has been changed to “Be A Condescending Dick Day” and no one bothered to let me know. Sorry if that comes off a little rough, but I am so over all the Columbus Day bullshit some of my progressive friends have throwing up on social media. Not so much that I’m about to punch my computer screen; it’s more at the “listen to a Ben Carson speech” level (which might actually be worse, now that I think about it). Armchair activists bore the living shit out of me. Said the guy who spends an inordinate amount of time posting snarky shit on the internet.

It would be different if all this anti-Columbus stuff was coming from Native Americans, but it’s not; every single thing has come from white folks. A few items have been shared from a native person’s page or is in their voice (blog posts, articles, etc.) and those are cool. They’re also a little disturbing because I’m not seeing them firsthand, which means my friends/follow list isn’t nearly as diverse as I thought it was. But, the vast majority are posted by white people from other white people. Why is it that allies of oppressed people are usually more strident than the oppressed people themselves? I love you guys, but you’re getting on my nerves.

I make two exceptions for these anti-Columbus Day posts: 1) This clip from John Oliver’s “Last Week Tonight” because it’s funny (and Oliver is one of my idols) and 2) this comic from The Oatmeal, which doesn’t just slam Columbus (even though the dude deserves it), it offers an alternative. Yes, I am aware that there is a move to transform Columbus Day into  Indigenous Peoples’ Day, but come on. We ignore the shit out of this holiday now and it’s about a white guy. Do you really think changing it into a day that celebrates people who aren’t white is going to go over any better? Especially when the purpose is to remind us of the shitty way we’ve treated Native Americans? Oh yeah, Americans will piss themselves in excitement to celebrate that holiday.

Sure, Columbus was a massive asshole and, we really, really shouldn’t have a holiday named after him. Hell, I’ll even go so far as to admit Columbus Day should be changed to a day that honors Native American contributions to this country. I would say that armchair activism isn’t going to get us there, but I’d be wasting my breath since progressive white people only seem to interested in taking on causes that don’t cost them anything, like Columbus Day or gun control. But, this way is easier and it looks so cool on Facebook. I guess that’s what really matters isn’t it?