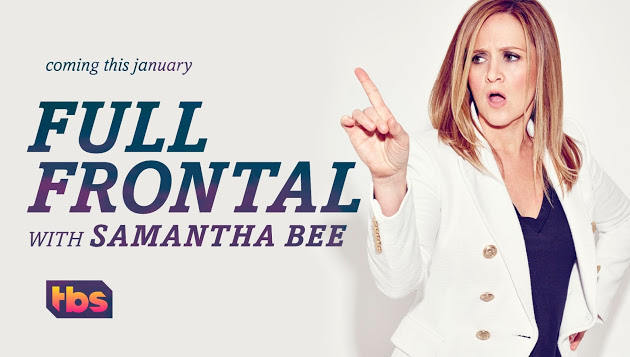 At the risk of sounding like a broken record, One Million Moms is at it again. And, by “at it again”, I mean they’re upset about another TV show they haven’t seen. This time, it’s Samantha Bee’s upcoming series, Full Frontal. This time, however, there’s a new wrinkle: they’re wound up over the title of the show. Yes, beloved, you read that right: the title.

Last week, the Moms posted a new petition blasting Bee’s new show because, and I quote, “The title of this show alone is unacceptable. Even though airing later in the evening since it is a late night show, the name will appear in the TV lineup of programs scheduled and previews will air earlier during the day.” Really? I hate to break to these blue noses, but your kids hear a hell of a lot worse things than “full frontal” at school. Maybe even at home.

What, exactly, is so wrong with the term, “full frontal”? I suppose the problem comes from its origins: it was first used to describe depictions of nudity. As the Oxford Dictionary puts it, “with full exposure of the front of the body.” But, the phrase has picked up another meaning along the way: nothing concealed or held back, direct, hard-hitting, etc. Hell, even the Urban Dictionary, a publication that never misses a chance to be magnificently crude, defines “full-frontal” as “thoroughly, completely and totally (from full frontal nudity).” Of course, another definition says, “when a celebrity shows more than just their bum in a film (ie: their penis or bush). This is usually for artistic reasons but clearly some serial full frontalists just like taking their kit off for the camera!” But, still…

Of course, OMM has other issues with the show, including things like “vile content and language” and…, well, that’s about it. They don’t really mention anything else because they can’t; there’s not much out there because Bee and her husband, Jason Jones, only started working on scripts back in May. Do you know what that means? The Moms are pissed about episodes that haven’t even been written yet. Holy shit.

In previous posts about the Moms and their crusade against indecency in pop culture, I’ve said that before they ask, nay, demand, that a network pull a show from its line-up, they might want to actually watch it. Getting worked up over something that’s still being written is a bit over the top even for a group like OMM. Which makes me wonder if there’s another problem with “Full Frontal”. Like maybe Bee, herself.

What’s so bad about Samantha Bee, you ask? Well, for one, she’s a Daily Show alumnus and you know how conservatives feel about that (hint, they don’t like it). But, the real problem may be found in an  article from the Advocate: Bee is “a longtime LGBT ally who specializes in finding the funny in feminism.” An ally and a feminist? Now, things make a little more sense.

To be fair, however, the teasers for Bee’s show do lend a certain credence to the Moms concern about content and language. Like this clip:

And, like most comedians these days, Bee does have a well-deserved reputation for pushing the envelope. But, so does Larry the Cable Guy and I don’t see any petitions about keeping him off the air. I wonder why that might be?

Conservatives love to talk about “personal responsiblity”, but only when it suits them. When it comes to things they don’t like,  they have no problem making decisions for the rest of us. They need to remember that every television is equipped with both a channel selector and an on/off switch. And, that no one is forcing anybody to watch this stuff. In other words, the Moms need to worry about their house and let me worry about mine. I mean, this is America, after all.