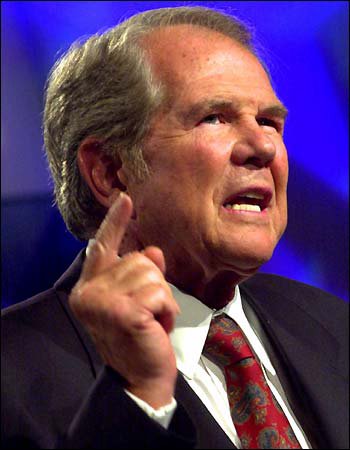 After a month or so of going at Pat Robertson and Franklin Graham pretty hard, I decided to take a break from writing about their shenanigans. That hiatus was still in force this morning when I was going through my emails and found a Google alert about the host of The 700 Club that linked to a Right Wing Watch article with this title:
Robertson: ‘Homosexuals … Want To Come Out And Stick It To The Christians’
But, wait; it gets better! Robertson also used the phrase “organized thrust” just a few words later.  I think you can see how irresistible this was.

Robertson’s complaint came in connection with a story that ran on CBN’s website that “reported” on the awful persecution American Christians are suffering these days. According to Alliance Defending Freedom attorney Matt Bowman, asking people like Kim Davis to do their damn job is part of an attempt by progressives to push our agenda. How? By “redefining jobs”, of course.

According to Pat, expecting people to do what’s in their job description is “tyranny” because “Believers should not be forced to do something they don’t believe in”. Hell, I don’t believe in paying interest on loans; since the company that holds my mortgage is American, does that mean I drop that and just pay the principal? That would be pretty freaking sweet because it would save me nice chunk of change.

In his own classically clueless way, Pat says that being LGBT+ “used to be considered perversion, it used to be considered an abomination”. And, he’s right; Leviticus 18:22 does say that. But, it is interesting to hear this statement coming from man wearing clothes made of different fabrics, with a nice haircut and fresh shave, and who quite possibly had shrimp or barbecue for lunch. I guess those “abominations” don’t count. Funny how that works, huh?

I find it…, thought-provoking? No, what about “fascinating”? Not that either. Hmm, maybe “intriguing” is the word I’m looking for. No, that’s not it either. Let me think for a minute. Hey, I’ve got it: “fucking ridiculous”.  As in, I find it fucking ridiculous that Pat Robertson can go on television and say, with impunity, that expecting people to what they were hired (or elected) to do is “absolute tyranny” and that you’re standing up “for freedom” by insisting you be allowed to continue discriminating against people who are LGBT. Imagine if Christian leaders had said this kind of stuff about interracial marriage? Oh wait, they did.

I keep hearing people carry on about how holding someone to the agreement they made when they took a job is “tyranny” or “persecution” or any number of other inflammatory terms. And, they would be right…, if the employees in question were being in those jobs against their will. But, they’re not. Every person crying “Persecution!” in these cases are free to leave and find a job that won’t infringe on their personal beliefs. Sounds like some folks need to learn what “persecution” actually means.

Look, you can believe whatever you want to believe; in the Flying Spaghetti Monster, that an evil, alien space lord dumped billions of his people in a volcano and blew it up or that the Bible says “gays” are an abomination. But, what you can’t do is use that belief to deny people their inalienable rights. Especially when you want to do that while collecting a government paycheck. If you ask me, that’s an abomination.