When I posted this story back during the summer, I was pretty happy with it.
Then, I let a couple of my English professors have a go at it, which was a slightly
humbling experience.  It was, I believe, worth the pain. Take a look at this
new, improved version and see what you think. 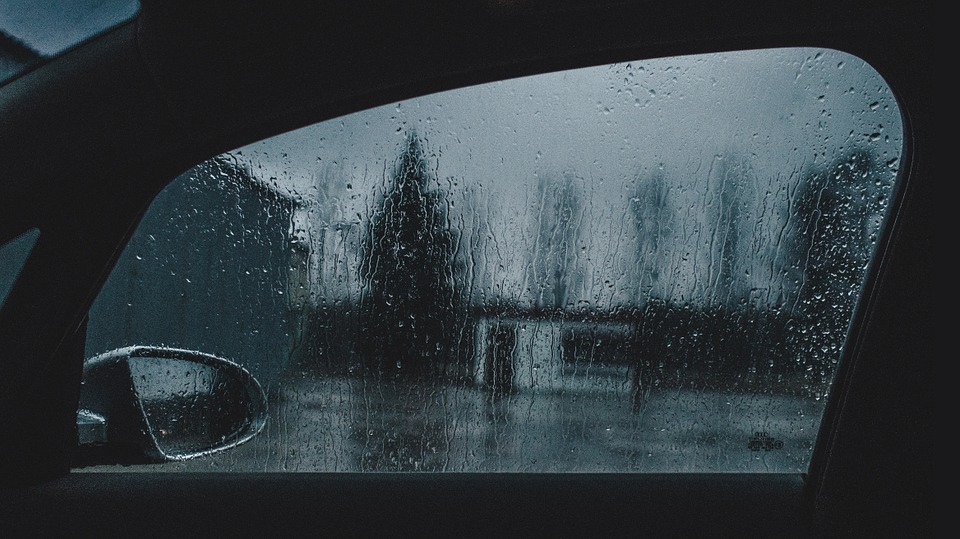 “We’ve got a while yet,” he said. “You sure you wanna do this? You don’t have to. We can find another way.”

“No!” she snapped. Then, softer, “Sorry. We’ve been over this and over this. There is no other way.”

“I know. I just… never thought I’d be part of something like this.” He dropped his head onto the steering wheel. “How the fuck did we end up here?”

She turned in her seat to look at him. “Does it matter? We’re here and this is our only way out. Believe me, if there were another option, I’d be all over it.” She shifted back and stared out the windshield at the rain that sluiced down in buckets.

Suddenly, he sat up. “No! You’re not doing this. I am not going to be that guy.”

He reached down to start the car, but she was quicker and snatched the keys out of the ignition.

“We’ve already had this conversation and this is it: Our only option. There. is. no. other. way!” She dropped the keys on the console between them. “Look, if I can handle this, you can handle this. Fuck, I’m the one who’s actually doing something. You just have to sit around and wait.”

It was his turn to stare at her. “Yeah, it’s so easy for me. Just sit there while my girlfriend is violated. And, why? Because we owe a shit ton of money and I can’t keep a fucking job. It’ll be a piece of god damned cake.” He looked out the side window as the rain ran in streams down its surface. “Fuck you,” he said softly. He heard her breathe in sharply. He didn’t turn back.

“I’m sorry,” she said, with a catch in her voice. “I guess I didn’t think of what this is doing to you.” Her voice trembling, she said, “Look at me.” He didn’t move and his breathing began to fog the window. On the verge of tears, she begged him, “Look at me. Please.” His window became opaque as his breath continued to cloud it. Crying, she pleaded with him, “Won’t you please look at me!” Slowly, he turned back, but stopped short of doing what she asked.

“Look,” she said. “This has got me on edge and I just wasn’t thinking about how it was affecting you. Can you forgive me?” He continued to stare out the windshield. “Please?” she added, a hint of desperation in her voice.

He took in a breath, held it a second and slowly let it out. “Yeah. I guess we’re both having a harder time with this than we thought we would.” He fumbled around in the console, coming out with a napkin. He wiped the window clear. They sat quietly for a few minutes.

She nodded. “So, you talked to Kat and she said it wasn’t so bad, right?” There was much less confidence in voice than had been there earlier.

“She said she was super-nervous at first, just like you. They gave her a something to take the edge off and she just sort of floated through the whole rest of the… thing.”

She hesitated for a second, then asked, “What did Tony say?”

A sour look came over his face and he answered, “Tony didn’t say shit. He just sat there. After a minute or two, he got up and left the room. Kat told me he had a really hard time with the whole thing. Went bought some 4 Loko and got fucked up while it was going on.”

She sat there, staring at the rain on the car window and said in a voice almost too soft to hear, “You won’t do that to me, will you?”

His head whipped around. “Wha—, why the fuck would you even ask that?!?” he snapped.

She flinched. There was a drawn-out pause, then she said, “Well, there was that time at I got so drunk I―”

He slammed his fist on the dashboard, “You are never going to let me forget that, are you!” His window and the windshield both began to film over with vapor and he gave a short, bitter laugh. “One time,” he said, holding up a finger. “One time I leave you at a party and you just can’t let it go.”

“But, I was passed out in Tony’s bedroom!” she protested. “Anything could’ve happened.”

“Oh, you were safe enough,” he said. “If you’re a guest in Tony’s house, he’s not gonna let bad shit happen to you.”

“You don’t know that. He can’t be everywhere.”

“Whatever. Nothing happened, so everything’s cool. Why do you have to bring that up every time I say I’ll do something?”

She sat there for a moment, before saying, “I don’t know. I guess I can be kind of bitch sometimes.” He nodded. She pulled her arms in across her chest, hugging her herself. “I’m sorry. I won’t mention it again.”

“It’s okay,” he said, grabbing another napkin and wiping the condensation away. He reached out and caressed her face. “And, don’t worry. I’ll be right outside the whole time, waiting for you.” She smiled and laid her hand in his. He let their hands fall onto the console. Then, she wrapped her arm in his and pulled it in. It was as close to a hug as could be managed in the confines of the front seat.

They sat that way, in silence, for a few minutes before she asked, “What time is it?”

He glanced at the clock. “You’ve got a few minutes.” After a long pause, he asked again, “You sure you want to do this?”

He looked down. “I know. So am I. But what else can we do?” He exhaled. “I mean, do you have any idea how bad things will get if we don’t handle this, right now?” She nodded. “I don’t even want to think of the consequences if we back out. It will not be pretty.”

“Yeah,” he said, “me too.” They sat there, watching the rain as it coursed down the windows of the car. A smile played across his face and he said, “Hey, remember that time down by the lake…”

“What? You mean that time with the ducks?”

“Yeah.” He let out a tiny laugh. “They were after the sandwiches an—“, the alarm on his phone began to sound. “It’s time,” he said.

Without a word, she reached into the back seat and grabbed a small duffle packed with all the things she’d need. As she turned back around, he pulled her to him and kissed her. She looked at him for a moment. Then she got out of the car and walked through the pouring rain to the door of the building. He watched her all the way, until she disappeared inside. Then he turned and sat there, watching the rain on the car windows.