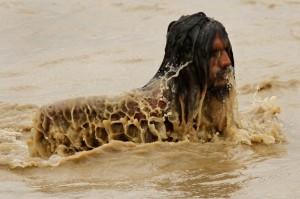 During a recent sermon, I was reminded of the story of Naaman. It’s about a powerful dude, Naaman (duh), who has a skin disease and visits Elisha to get some healing. Things go a little sideways because, not only does Elisha fail to treat him with the respect he so richly deserves, he tells the guy to go wash in the Jordan River seven times and everything would be cool. Then, when this crazy-ass cure actually works, the bald-headed old bastard won’t even take anything for his trouble! What the hell?

You know Naaman had to be thinking, “I go to all the trouble of figuring out how things are going to pan out and now I have to do something different?  Even worse, something I really don’t want to do? That’s fucked up.” Now, before you get to down on Naaman, remember that the Jordan has never been known as the cleanest body of water on the planet. Truth be told, none of us would want to take a dip in the nasty-ass river. Telling someone to “Go and wash seven times in the Jordan River” and, afterwards, their “skin will be restored and become clean” is about as counter-intuitive as it gets. But, I can identify with Naaman because his reticence to follow Elisha’s instructions reminds me of myself about midway through either of my two chemotherapy regimens.

For those of you who don’t know, in 2007 I was diagnosed with colon cancer. I won’t go into the details (you can find them here), but it wasn’t pretty. That’s because the treatment for cancer is either radiation and/or chemotherapy, both of which involve pumping enough poison into your body to kill the cancer, but not enough to kill you and generally results in side effects like extreme nausea, diarrhea, hair loss, nerve damage/pain and other assorted delights. Good times, let me tell you.

Through all that, there were plenty of times I felt like Naaman and wondered why the cure for what ailed me had to be so shitty. It’s bad enough to suffer the indignity of being sick, but why I couldn’t choose how I got well? Because if it was up to me, there’s no way in hell I’d to go through chemotherapy of my own volition. Personally, I think Naaman was a pussy complaining about what Elisha told him to do; after 4 months of chemo, bathing in what amounted to a sewer would’ve looked pretty fucking sweet.

These two stories point out one of the most irritating things about God: the Almighty almost never does things the way we expect. No matter how you think a situation should work out, God will go a different direction. When the Jews spent years longing for a Messiah to deliver them from the oppression of foreign rulers, did God send them a warrior king in the mold of David like they asked for over and over? No, God did not. With the twisted sense of humor that can only come from a supreme being, God sent a poor, working-class rabbi who preached a message of love and inclusion to deliver them from their miserable existence. Evidently, God gets a kick out of fucking with our expectations.

Of course, it could be that our expectations are fucked up and God is sending what we need and not what we ask for. Sometimes, what we need is to practice non-violent revolution and not put ourselves in the way of the oppressor’s fist, to wash in dirty water to cure a skin disease or allow ourselves to be poisoned to kill the mutant cells attacking our body from within. In other words, God doesn’t wipe away the bad things with nothing more than a wave of the hand; God requires action on our part.