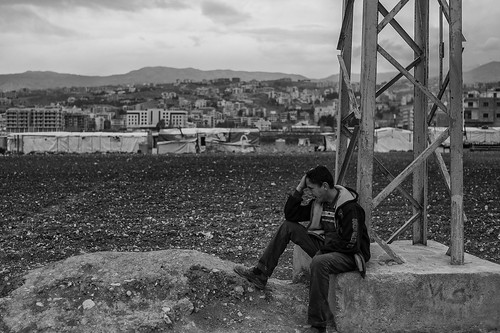 Okay, the dialogue about the Syrian refugee crisis has gotten way out of hand. Is a country that was founded by immigrants, some of whom were fleeing sectarian violence and persecution, seriously debating whether or not to accept people fleeing from sectarian violence and persecution? I would think that this is a no-brainer, but obviously not. But, why? Why is this even a question?

I can answer that with one word: fear. You can parse it however you want, talking about “security”, “prudence” or whatever the current excuse might be, but the bottom line is that Americans are afraid to even let these folks into our country, much less welcome them, because of a threat made by ISIS. These douchebags, who fill social media with all manner of bullshit, claim that they’ve used the refugee crisis to smuggle 4000 trained fighters into western countries. And, even though there is no credible evidence of this happening, Americans are wetting themselves in fear. What the fuck? When did we turn into craven little wusses, cowering in fear because of some fuckhead talks big on the internet?

Now, let me say I’m not pissed at regular folks who are asking these questions; they’re merely responding to the fear-mongering bullshit that is permeating the airwaves and internet in the wake of the Paris attacks last week. The people pushing that bullshit are another story. Between politicians playing on people’s fear and uncertainty and the media’s need to fill the 24 hour news cycle (not to mention their whorish desire for higher ratings), these assholes have created a climate in the U. S. that is depressing, to say the least.

That climate has led people running for the highest office in the land to say incredibly asinine things. According to Jeb Bush, we should restrict our efforts to aid refugees to Christians. Seriously, he actually said that. And, as bad as that is, Chris Christie’s remarks are even worse. According to The Big Guy, we shouldn’t even let orphans under 5 into the country. What? While that sounds uncomfortably close to a GOP brain trust member Louie Gohmert’s “terror baby” comments, in Christie’s defense, I should point out that he feels this way because “…they have no family here. How are we going to care for these folks?” So, while it could be worse, it’s still bad enough that one of Congress’ most virulently Islamophobes, Peter King (R-NY), publicly disagreed with him.

In what may be the most clueless display by a “Christian”, Mike Huckabee went on Morning Joe to trumpet his unwillingness to take in refugees. For those of you who didn’t know, Huckabee is a former a Baptist minister. You heard that right, friends; a man who accepted a call to carry the message of a refugee says, in essence, that we should turn our backs on refugees. Fuck.

Sadly, these yahoos aren’t alone; I have lost count of the disgusting posts I’ve seen about the refugees. This may be a little inflammatory, but I’m not sure you should continue to call yourself a Christian if you think turning Syrian refugees away is the right thing to do.

I know we’re trying to figure out which is more important, compassion or security, but it’s really no contest: compassion should always come first. Especially when security really isn’t an issue, as in this case. In the last 14 years, the U. S. has taken in 784,000 refugees and, in that time, 3 have been arrested for terrorist-related activities. I tried to figure the percentage of that group who turned out to be terrorists, but the result was so statistically insignificant, it couldn’t be represented on the calculator. In the interest of full disclosure, however, I should also admit I suck at math and may have screwed things up. But, still, 3 out 784,000? And, those 3 weren’t even close to doing anything.

I think it’s time we, as a country and as individuals, examined why we’re so afraid of an ridiculously remote possibility that we’re willing to shit on a bunch innocent people. Considering that Americans suck at that kind of self-reflection and avoid it like the plague, I’m not holding my breath until we do.