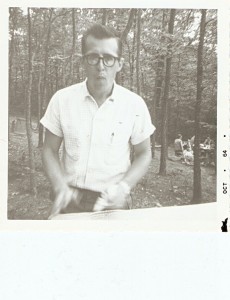 Two years ago yesterday (April 10th), my father became one with the cosmos. And, that is exactly how he would put it. None of that “went to be with the Lord” stuff; flowery euphemisms about heaven were not his thing. He talked about heaven, of course, but it was never the standard issue, sit-on-a-cloud-with-a-halo-and-a-harp variety. Over the years, he related several of his ideas on the topic and most of them were in line with current progressive views. I think he would loved the Eastern Orthodox conception of heaven and hell, where being in God’s presence and it is both punishment and paradise, depending on your spiritual state. Suffice it to say, the old man was ahead of his time, being “spiritual, but not religious” long before it was cool.

Because of that  he would find quite a few kindred spiritsamong my friends these days; possibly none more kindred than Kimberly Knight, who  has been agonizing over the decision to leave the clan of Christianity. He would definitely understand what she’s going through because he wasn’t always the forward-thinking progressive he was in later years. Once upon a time, my father was a conservative evangelical Christian.

Through most of the Seventies, my family was deeply involved in the Charismatic movement of that time, although the groups we aligned with really had more in common with Thomas Road than Azusa Street. Well, except for the whole speaking in tongues thing; that would’ve freaked ol’ Jerry out big time. The whole story is much too long to tell here, but I will say it wasn’t pretty. In some way or another, every one of us was abused by a man who could only be described as a cult leader. Around 1980, we finally got out and, except for a couple of funerals and mine and my brother’s weddings, Daddy never darkened a church door again.

Although he never said so, I think one of the reasons he so throughly rejected the church back then is because he did not like the man he had become there. Like a lot of us, his involvement with the institutions of the church and Christianity (which I see as different from the faith and practice of Christianity) worked to bring out the negative aspects of his personality and subdue the positive ones. It took him almost 20 years to come to terms and make peace with that. When he did, he took each of us aside and apologized for everything that had happened.

But, though he never set foot in another church, he never stopped seeking. In the years between leaving Christianity behind and “becoming one with the cosmos”, he investigated some rather far-out New Age ideas (some of which differed little from “name it and claim it” prosperity gospel); Science of Mind; eastern concepts, like re-incarnation and karma and, towards the end, Native American spirituality. But, through it all, he never stopped believing in God. He may not have called God “God” (preferring instead names like Source, Spirit, Consciousness and other New Age-y terms), but he always believed there was some higher power at work in the world. And, while he didn’t have much use for most Christians, the same couldn’t be said about Jesus. I don’t know if he ever saw Gandhi’s quote about Christ and Christians, but it is the perfect summary of his views on the matter.

Though he would deny the name, my father was a better Christian than most Christians I’ve known. He loved his neighbor and his enemies, he did everything he could for those he saw in need and he did justice, embraced love and walked humbly with his God.

If he were here today, my father would put his arm around Kimberly and tell her “Shug, you aren’t leaving the clan, the clan left you a long time ago.”