Geez, it seems like no matter where I look these days, there’s god-damned rainbow staring me in the face. It’s all over Facebook and there are pictures of that damned flag everywhere. Hell, I’ve even seen a couple in real life. And, that this is happening as the Confederate flag is coming down makes things even worse. For the life of me, I cannot understand why the gay flag is okay, but the Confederate one isn’t. Oh sure, the rainbow flag is a symbol of a marginalized group fighting for equality and the Confederate flag has a long, ugly history of use by racists and bigots, but that’s no reason to support one over the other, is it?  Who, oh who is going to stand up for all the good, God-fearing Christians out there?

Well, we have our champion and it’s all thanks to the gays and Obama’s cowtowing to their agenda. That little stunt of bathing the White House in the colors of the rainbow was a step to far and now the big guns are out. That’s right, Franklin Graham is pissed. And, of course, he took to Facebook to vent his spleen about your usurpation of such a fine Christian symbol. Check this out: 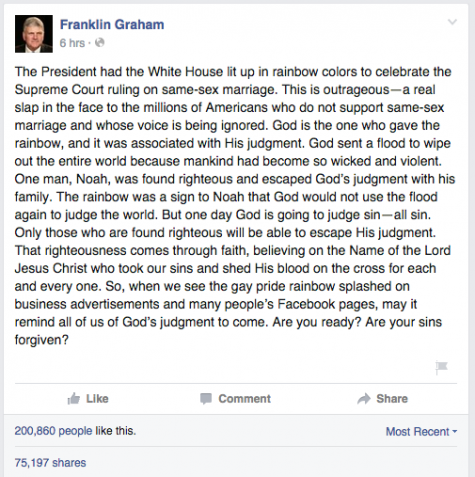 And, guess what bitches? It’s going viral. I know it is because the Conservative Tribune said so. What’s that? You’ve never heard of the Conservative Tribune? Well, let me clue you in. They are the website that brought us such hard-hitting journalistic pieces as “Famous Fast Food Chain Bans Wet Wipes So Muslims Aren’t “Offended” and “America-Hating Obama Unveils Sick Plan That Will End July 4th As We Know It“. I wish I had more info on them but, alas, they don’t have an “About” page and there’s almost nothing about them available on the web. Oh well, you know what they say: “If it’s on the internet, it must be true.”

But, that’s enough about those fine upstanding newspeople at the Conservative Tribune. Instead, let’s talk about God’s voice on earth. No, silly, not the Pope; God abandoned Frankie when started in with all that commie stuff. The man claims we need “a better distribution of wealth”. Doesn’t he know that God is a free-market capitalist? Seriously, he won’t shut up about all that “justice” crap. I don’t know about anyone else, but thinking about that stuff is hard and makes my head hurt. Lucky for me, God has chosen to speak to humankind through Franklin Graham, a man who spends his time worrying about the issues that really matter to Jesus’ followers. Like whether the President is really a Christian and what will happen to America now that we’ve thrown out God’s word and embraced apostasy. And, by “apostasy”, I mean “equal rights for gay people”.

So, the Supreme Court signs on to Big Gay’s agenda to destroy the United States and, in celebration, Obama lights up the White House like a big ol’ gay flag? Really? On the 4th of July, did he light it up in red, white and blue? I think not. But, then what do you expect from someone with such a shady background. Seriously, we still haven’t seen his birth certificate, yet (well, not one we’ll acknowledge, that is). It’s not bad enough that we’ve accepted the abomination that is gay marriage, but now we’ve allowed the gays  to co-opt the rainbow and use it to mock us? God is going to get us for that.

Of course, there are some liberal wags who suggest that if God didn’t smite the United States over holding millions of people in bondage and getting rich off the sweat of their brow, committing genocide against the native population of this continent and stealing their land, rounding up American citizens of Japanese descent and putting them in concentration camps and the disenfranchisement, marginalization and even lynching of African-Americans, God probably won’t pour out his wrath on us because we’ve seen fit to recognize the equality of people who are LGBT+  when it comes to marriage. Well, I’m sorry, Mr/Mrs Liberal, but “probably” just isn’t good enough. Besides, if I stop worrying about the non-existent possibility that God will punish us for loving our neighbor, I might have to actually do the hard work of, well, loving my neighbor. And, I’ll be damned if that’s going to happen.