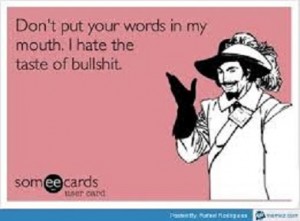 Recently, I read a blog post titled “Why Homosexuality Is Not Like Other Sins”.  In it, the author tells us that “Homosexuality is not the only sin mentioned in 1 Corinthians 6:9–10″ but “it is different from all the rest, at least right now.” Right off the bat, I saw a problem: namely, that Paul never mentions “homosexuality” specifically. Even the scripture the author quoted doesn’t say “homosexuality”, it says “sexual immorality”.  Conflating the two is bad scholarship and should have been a hint to stop right there. But I’m a glutton for punishment, so I kept reading. It got worse.

Normally, when I read stuff like this, I don’t get mad. Am I sad that some folks can’t seem to move out of the 1st century when it comes to religion and sex? Sure, but not mad. Then, this doofus started putting words in my mouth. I don’t like it when people do that. I especially don’t like it when people make sweeping generalizations about “what Christians believe” as if Christianity is some big, monolithic whole where we’ve all gotten together and agreed on the particulars of our belief. It’s not like that. Even if everyone else agreed on something, Baptists would object; on principal, if nothing else. And, if we didn’t get our way, we’d leave and start our own group with a shared statement of faith. Of course, some people would object to something in the new group and leave to start their own…, well, I think you get the picture. But, what really chaps me about articles like this is they make me say “Not all Christians are like that”; which is a statement I find to be almost as douchey as putting words in other people’s mouths.

Here are a few of the more egregious comments in the piece with my response:

The truth is, “Christians” like the author of this piece come off a lot like the Pharisee in Luke 18 (the parable of the Pharisee and the publican). Sadly,  certain people have twisted the scripture on this matter to back up that vanity. I don’t like being connected to that kind of Christianity and feel compelled to point out that fact, something that makes me feel more like that Pharisee I just mentioned than I am comfortable with. And, that my friends, pisses me off.