In the Republican race for the 2016 presidential nomination (aka 2nd place in the general election), all the candidates have touted their Christian bona fides. Hell, even the Donald has claimed the mantle of “Christian” and said the Bible is his favorite book ever (he couldn’t point to a verse he liked, however). But, in the shitstorm that compromises this contest, there is one Christian soldier who stands head and shoulders above the crowd: Mike Huckabee. Interestingly, this warrior for Christ doesn’t seem to grasp the essence of Jesus’ message; you know, that whole “Love one another” thing? Keep reading to see what I mean.

Before we begin, let me point out that Huckabee is the only ordained minister in the Republican field. Prior to entering politics and serving as a (relatively) populist governor for the state of Arkansas, Brother Mike attended the Southwestern Baptist Seminary and pastored churches in Pine Bluff and Texarkana. You’d think a fellow with that kind of background would have a better grasp of what following Jesus is all about and maybe he did early on. But, recently, he seems to have lost his way.

Last month, The Huckster jumped on the Kim Davis bandwagon, making a special trip to Kentucky, greeting the Rowan County clerk with a rally of her supporters after she was released from jail for contempt of court. That didn’t go so well, as he was almost one-upped by Ted Cruz (an alert staffer saved the day) and incurred the wrath of Survivor’s Frankie Sullivan for using the group’s song, “Eye of the Tiger”, without permission. That went well, didn’t it?

Oh, but that’s not all, beloved.  A couple of weeks ago, Frito-Lay decided to provide limited edition bags of Doritos in exchange for a $10 donation to the “It Gets Better” project. The bags sold out quickly and everyone was happy. Well, not everyone. Huckabee took a page out of Franklin Graham’s playbook and had a conniption fit because something non-shitty was happening in relation to an LGBT+ issue. He sent a letter to the company asking them to “do some honest vetting about Dan Savage and his very hateful and vulgar comments toward Christians and his calls for violence and injury to people he disagrees with.”

Huckabee isn’t alone in this fight, though; One Million Moms is also in on the action. And, really, who makes a better ally for a Christian than the fund-raising arm of a certified hate group? According to director Monica Cole, Frito-Lay’s move is an “assault on Christian values” and she urged people to call the company and ask that they “drop its promotion of anti-Christian bigotry.” Right.

I have spent the last two weeks trying to figure out how a fund drive to benefit an organization dedicated to improving the quality of life for LGBT youth is “anti-Christian bigotry”. Especially when it’s just rainbow-colored corn chips. I mean, seriously, here’s a photo of the bag: 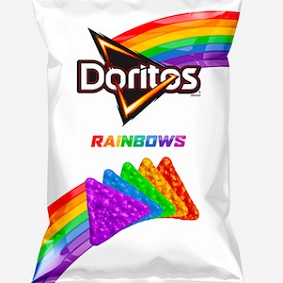 It’s a sad fucking day when the mere image of a rainbow inspires grown folks to lose their shit.

Of course, it’s really not the chips that are the problem. It’s not even the group that’s reaping the benefits of Frito-Lay’s largesse. No, it’s the man behind “It Gets Better”: gay-rights activist Dan Savage, who Cole says is “one of the most anti-Christian bullies in America.” Well, okay then.

I will grant that Savage hasn’t exactly been “polite” to anti-LGBT Christians (he is the person who coined the Santorum neologism(( you really shouldn’t click this link if you don’t want to be grossed out)) after all). But, if we’re being honest, people who are LGBT+ have plenty of reason to be “impolite” to Christians and we should own that shit, not whine about it.

The Church has systematically worked to marginalize the LGBT community for years and, now that society is beginning to see that marginalization for what it is, Christians are doubling down on their shittiness. That has taken a lot of forms as of late, but none quite as fucked up as dumping on a company for helping an organzation that works to reduce suicide rates among young people. Maybe it’s just me, but that seems like an odd way to love one another.