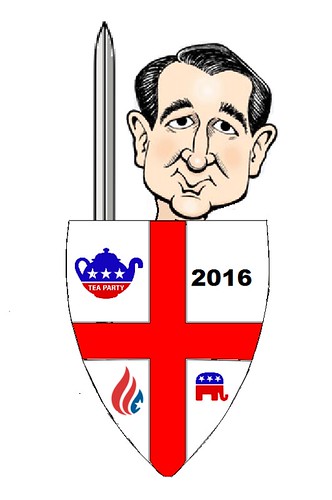 To say that this Republican primary season has been a 3-ring circus is like saying George W. Bush wasn’t a very good president: true, but an understatement of mind-boggling proportions. Most of that circus atmosphere is a result of one candidate: human hair ball Donald Trump.

As if the mere fact that this online-comments-section-come-to-life is dominating an actual political party’s primaries wasn’t bad enough, things on got even worse when self-professed “Mama Grizzly” Sarah Palin endorsed Trump in a speech that was breath-taking in its abuse of reason, the English language and pretty much anything else that comes to mind.

Of course, the media and the hosts of certain late-night TV shows are ecstatic at this developement. Many of us, however, recoil in disgust at whatever incendiary statement crosses the Donald’s lips (and generally scratch our heads at whatever spills out of Palin in her bizarre stream-of-consciousness romps). Progressives, in particular, lose their minds when Trump’s latest repellant pronouncement comes across their social media feeds (because let’s face it, no good progressive actually watches television anymore).

There’s a problem with all that outrage: it’s misdirected. Consulting the Google provides ample evidence that Trump is nothing more than an opportunistic attention whore (maybe that’s why Palin decided to endorse him; birds of a feather, and all). If hell were to freeze over and the man was actually elected president, the chances that he would enact any of the asinine policies he’s put forth aren’t all that great. Whatever else Trump might be, he’s a businessman at his core and doing any of that shit wouldn’t be good for business. So, if Trump isn’t the conservative boogie-man we’ve made him out to be, who is? That’s easy: Ted Cruz.

Yes, Ted Cruz. Aka, the man who, back in December, successfully won the support of James Dobson, founder of Focus on the Family and one of the nation’s most influential evangelicals. That endorsement came on the heels of others from  the Family Leader’s Bob Vander Plaats, the National Organization for Marriage, and GOP activist/direct-mail pioneer Richard Viguerie.  In other words, the Religious Right has anointed Cruz as their man. But, why?

Now, I could list the Tea Party darling’s socially conservative bona fides, like his hatred of Planned Parenthood or never meeting an anti-LGBTQ pastor/activist he didn’t like, but that’s been done so many times, it’s not funny anymore. Besides, there are other candidates who have championed these issues far longer than Cruz without getting a fraction of the attention this gynotician has amassed in his 4 years on the national stage.

Take Rick Santorum, for instance. Santorum holds views that are just as reactionary/batshit crazy as anything Tailgunner Ted has said and he can’t get arrested on the campaign trail. That probably has something to do with the fact that he’s Catholic, but still. And, then, there’s Mike Huckabee. Hell, Huckabee was a preacher and had a show on Fox News. You’d think that would make him a sure thing for the religious right’s support. But, nope. Both Santorum and the Huckster dropped out after dismal showings in Iowa.

So, what is Cruz’s secret? What is the magic recipe this “dirty syrup guzzler” has cooked up to woo social conservatives in a way that no one has done since George W. Bush captured their hearts 16 years ago? I belive it’s not what he’s saying, it’s the way he’s saying it.

In the lead up to the Iowa Caucuses, Cruz urged his supporters to  “Strap on the full armor of God” and claimed his campaign has sparked “a spirit of revival” leading “the body of Christ rise up to pull us back from the abyss.” If you want to woo evangelicals, you  can’t do better than draping your message in Jesus and the Bible, no matter how antithetical to either of those it might be.

Cruz’s uncompromising support of socially conservative positions (which, along with a repellent personality, has earned him the title of “most hated man in the Senate”) and his sermonizing political speeches combine to make him the religious right’s (wet) dream candidate. Whether that turns out to be a blessing or curse for the Texas Tosser remains to be seen. Me? I’m hoping for “curse”.