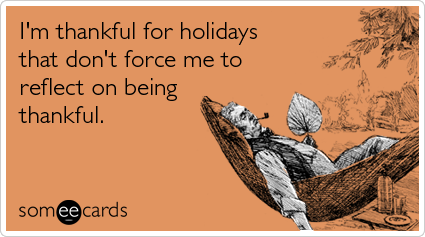 Faithful readers of The Progressive Redneck know that I’m great at starting new features or series, even if the features or series themselves aren’t all that good. They also know that I suck at following through on them. There are a couple of reasons for that; some of them were kind of shitty (Christian Dick of the Moment, for example), while others fell victim to my ADHD. But, my annual Thanksgiving post may be the lone exception. Amazingly, I have written one of these since I started blogging back in 2010. That means I was doing this way before it was cool (suck it, 30 Days of Thanksgiving!). Of course, the things I talk about in these posts aren’t what you usually hear when people start “giving thanks”, they’re stupid, ridiculous, trivial…, and real.

Once again, I’ve added to the avalanche of trivial shit on the internet. And, as I said last year, I should feel bad about that. But, I don’t. Not in the least. Happy Holidays, y’all.