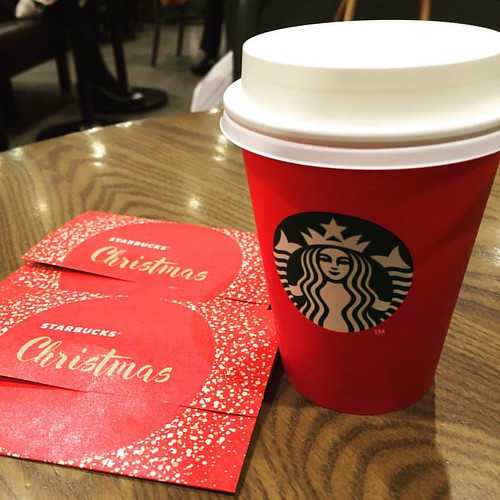 Apparently, this is what a “war on Christmas” looks like.

I had originally planned to start this piece by telling you that the conservative’s “War on Christmas” has started early this year, thanks to Starbucks’ new minimalist holiday cup design. Unless you live under a rock, however, you already know that because “The Battle Of The Cup” is all but inescapable. If, however, you don’t know what I’m talking about, here it is in a nutshell: the 2015 Starbucks holiday cup is red and unadorned with any Christmas-ey decorations. For some reason, that has sent conservative Christians into a frenzy and declare that Starbucks did so “because they hate Jesus.” I don’t know who started this shit, but Starbucks needs to track them down and thank them because you just can’t buy this kind of publicity.

This brouhaha started over the weekend and, by now, it has been written/discussed/dissected by people much smarter than I and all the decent, intelligent comments about this situation have already been made  so there’s no point in my going there. But, that’s okay because it allows me to play to my strengths: ridicule and sarcasm. And, I have to say, if ever a situation called for ridicule and sarcasm, it’s this one.

Think about it for a minute: Some Christians, members of the dominant culture in this country (78.4% of Americans identify as Christian, a decline from previous studies), are upset because a business decides not to cater to their whim and declare that it’s part of some liberal, PC “War on Christmas”. I swear, some days, this shit writes itself.

Now, most of this freak out is part of the the aforementioned “War on Christmas”, which is really a fabrication perpetrated by a certain television news network to keep conservatives whipped up about bullshit so they don’t realize how badly they’ve been used by the Republican Party. But, that whole “decline in the number of people who identify as Christian” plays a role, too. If only because, without it, said news network wouldn’t have any fear to play on and what would they do then?

Seriously though, have things gotten so bad for Christians that we can no longer afford to share the month of December with folks who believe a little differently? I mean, we’ve only been sharing this month for, well, as long as there’s been this thing called Christmas. In the next month and a half, there are at least 8 non-Christian holidays being celebrated. Granted, the majority of them are either Muslim or Pagan, which don’t really count as far as the folks who have their knickers in a twist over all this are concerned. But, at least one of those holidays is Jewish and I thought we liked Jews. Or, do we only like Jews when we’re separated by an ocean?

But, all the reasons aside, I really don’t get what all the shouting’s about. I mean, it’s not like previous Starbucks holiday cups were an integral part of “putting the Christ back in Christmas”. In years past, the cups have featured snowmen, snowflakes, Christmas ornaments, and other secular symbols of the season. No nativity scenes, no stars, no Madonna’s (Jesus’ mom, not the singer). So, what’s the big deal about a plain red cup? Wasn’t it just a few years ago that most of these people were singing some piece of crap song about red cups? Maybe if they’d put a little of the stuff from their red solo cup into the Starbucks cup, they wouldn’t be so pissed off.

Look, there are plenty of things in this country that are a war on the very spirit of Christmas: violence, poverty, hunger, racism, homelessness, etc. Why is it that those things are bearable, but a fucking paper cup that doesn’t have Christmas crap plastered all over it means secular forces have declared war on the season? A more cynical person would probably say it’s because getting mad at Starbucks doesn’t require people to do actually do anything other than be outraged, while addressing those other things might mean giving up some of our stuff or interacting with “those people”. But, I’m not saying that. I’m not saying that at all.