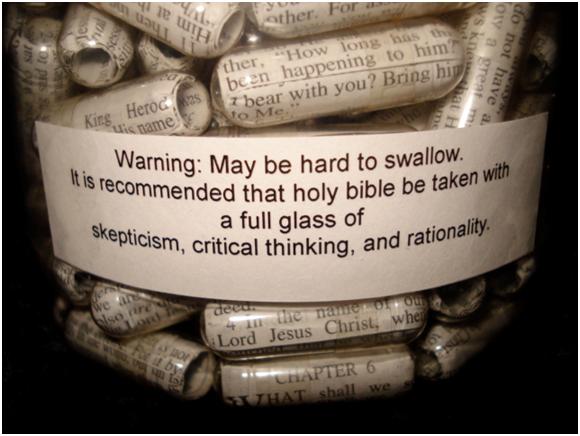 One of my most fertile fields for developing blog posts is in the car. Driving requires just enough concentration to quell the manic mental activity brought on by my ADHD and allows me to spend enough time on one subject to put together a coherent thought. Recently, while tooling around town, I thought about all the truly weird shit that’s in the Bible. Then, I thought, “Why would any thinking person believe these insane things actually happened?” (See “Biblical literalism”) My next thought was that maybe these “thinking people” hadn’t actually done a lot of…, well, thinking on this subject. So, I decided to toss out a few nuggets for them to mull over.

So, do I think this will sway any biblical literalists from their belief that not only can we take the Bible literally, we must take it literally? Sadly, no, I do not. But, it was fun to write and, I hope, fun for you to read. And, who knows, maybe there’s a lone fundamentalist out there, on the verge of breaking through to a new way of looking at the Bible. If so, this will probably drive them right back into the fold. Oh well.