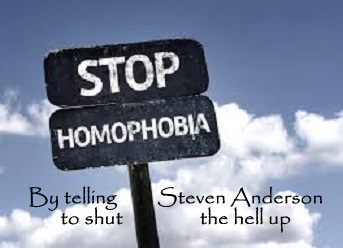 Okay, so there’s this preacher in Tempe, Arizona named Steven Anderson who has a habit of saying controversial things. And, by “controversial”, I mean “really douchey crap calculated to draw attention”. He first came to my attention a few years back, when he went on record saying he was praying for President Obama’s death. Since then, his sermons have played like a greatest hits compilation of conservative Christian craziness((I seriously thought about saying “Konserative Kristian Kraziness”, but that’s too inflammatory even for me. Plus, I hate alliteration)), saying women should shut up in church, that all gay people are pedophiles and that all people who identify as LGBTQ should be executed. The last one is a recurring theme with Anderson and he came back to it last Sunday, saying that executing gay people is the quickest way to cure AIDS. Right, because only people who are LGBT get AIDS. Calling Anderson bat-shit crazy may just be the understatement of the century.

Yes, Anderson a nut job’s nut job, but he’s not the only one who believes this stuff. It’s no secret there are all too many people who agree with him; they’re just a little more circumspect about saying so out loud. Because of that, I decided to take a look at the salient points of his argument ((well, the only ones I pick out in the short time I could stomach his “sermon”)) and see if they hold up:

I struggled with writing this piece because I didn’t want to give Anderson any more publicity than he’s already getting. But, the realization that I might actually know some people who agree with this douchebag((yes, I called a preacher a “douchebag”. If that’s what offends you about this post, check your fucking priorities)) changed my mind and I wrote this in the hope they might read and change their minds. Am I kidding myself with that hope? Maybe, but stranger things have happened.