I’m thinking about starting a new feature called “Dumbest Thing On The Internet”. If that happens, this will most likely be the inaugural piece. 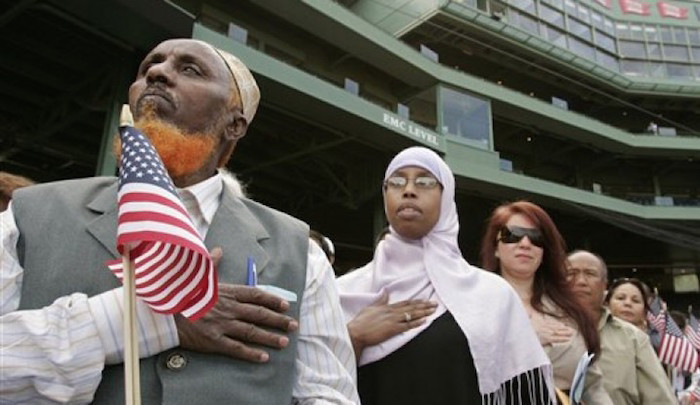 It appears that some folks are a little upset over a recent change in the United States Oath of Allegiance. claiming it was done to comply with Sharia law. According to the latest from the tinfoil hat crowd, this is a problem because “Islamic supremacists” (that’s a new one) could “feign loyalty to non-Muslim “infidel” authorities”. These new changes will allow them to carry on their pretense without fear of having to live up to their oath. Yes, because that makes so much sense.

Wherever did I find this jewel of a conspiracy theory? In an article from the Breaking Israel News website, titled “Obama Alters U.S. Oath of Allegiance in Compliance with Islamic Law“, that’s where. You might think something this crazy sounding would be a one-off, only showing up on that one site. If so, you really don’t know the internet. Google that shit and you’ll get page after page of unfiltered, batcrap crazy.

Before we get into all that nuttery, let’s take a look at these changes to the oath. Here it is, straight from the horse’s mouth:

A candidate may be eligible to exclude these two clauses based on religious training and belief or a conscientious objection. The new guidance clarifies that a candidate:

That’s pretty much it.  As you can see, it’s not a sinister plot to help Muslims bring about an American caliphate, just a change that reinforces new citizens’ right to conscientiously object the same as natural-born ones. I’m not sure how this morphed into Obama instituting Sharia law. I guess it comes with the territory when you’ve lost your god-damned mind due to Obama Derangement Syndrome.

As I read this article, I was thinking, “Holy shit, this is some whacked out stuff”, but I didn’t really see a way to use it here at The Progressive Redneck. Then, I found it: the first item in the criteria says that a candidate may request a modification based religious belief or conscientious objection “arising from a deeply held moral or ethical code.” Hmm, I thought, that sounds familiar. Where have I heard it before? Oh yeah, in all those damn “religious freedom” laws conservatives have been shoving down our throats in the last couple of years. We all knew this “religious freedom” was just for Christians, but now it looks like it doesn’t have jack shit to do with actual freedom either.

Why do I say that? Because the same conservatives who demand we respect people’s “deeply held religious beliefs” on marriage are pissed off because the oath of allegiance now includes a couple of changes that actually respect the “deeply held religious beliefs” of some of this country’s newest citizens; who, incidentally, might not be Christian. That is some Grade A hypocrisy, right there.

Am I being a little hard on folks who believe this shit? Maybe. Okay, probably. But, I’m a little short-tempered because we’re 7 years into Obama’s presidency and people still believe he’s a secret Muslim. Seriously? Okay, so maybe he doesn’t wave his faith in everyone’s face like some of our leaders have (I’m looking at you, G. W.), but he doesn’t hide it either. Of course, this disconnect on the president’s faith most likely arises from two sources: 1) while he may be a Christian, he’s a progressive one. And, we all know that progressive Christians aren’t really Christians. 2) “Muslim” is a code word. And, I’m pretty sure I don’t have to tell you what for.

So, yeah, I’ve been a little harsh and dismissive of people who believe some things I find ridiculous. And, believe it or not, that does bother me. I’ve spent hours struggling over this post, worrying that it’s too mean, doesn’t adequately respect the beliefs of others, etc. I don’t like being an asshole (although that does seem to be my default setting) and try to avoid it as much as I can. Okay, saying I don’t like being an overt asshole is probably closer to the truth, but shit like this riles me up. I console myself with the fact that when Jesus got riled up, he could be an asshole, too.