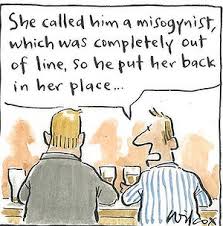 Friday night, a young man named Eliot Rodger killed 7 people and injured 7 more in the Isla Vista community near the University of California, Santa Barbara. Rodger’s motive? To seek revenge on women, who he felt had sexually rejected him. The blogosphere is on  fire with posts about this tragedy and some of them are saying misogyny is to blame.

Misogyny, in case you’re wondering, is the hatred, dislike or mistrust of women and that certainly seems to describe Rodger. He wrote a 137 page manifesto and posted multiple videos online that highlight his feelings toward women. In his final video, he says

I don’t know why you girls aren’t attracted to me but I will punish you all for it.”

In another, he informs us

“All those girls that I’ve desired so much, they would have all rejected me and looked down upon me as an inferior man if I ever made a sexual advance towards them. While they throw themselves at these obnoxious brutes. I’ll take great pleasure in slaughtering all of you”

Obviously, the words of a seriously disturbed young man.

But, at least two articles I’ve read seem to reject the idea that mental illness played a part in this. In a piece for The Guardian, Jessica Valenti shares a Tweet from Molly Crabapple, who said

And, in an article on PolicyMic, Elizabeth Plank opines

“Rather than seeing Elliot Rodger as a product of society, the media has depicted him as a bloodthirsty madman, a mere glitch in the system. And yet the facts show a very different story… We often instead shift the conversation to “mental illness” and describe shooters as madmen, while the characteristics they exhibit are often an extension of toxic masculinity ideals that are institutionally reinforced.”

Are these authors right? Is this just another case of the He-man Woman Haters Club on steroids? Or is it a little more nuanced than that?

Let’s get one thing straight: Eliot Rodger did what he did because he was a deranged young man who actively resisted any help for his condition and, instead, sought aid on certain websites dedicated to “men’s rights” (look for more on this in a later article). Did society make him kill those people? No, he did it on his own with malice aforethought. Frankly, the idea that Rodger’s actions are solely the fault of a misogynistic society is troubling because it negates his responsibility for those actions and gives the next disturbed individual a free pass when they decide that their best option for dealing with their personal demons is violence.

However, while Rodger bears the ultimate responsibility for his actions, he is not alone. The immature little boys who run these “men’s rights” (what a sick joke that phrase is) websites, the NRA and the politicians in their pocket and churches/pastors/organizations who promote the view of women as domestic servants and breeding stock are also accountable for what happened Friday night. Make no mistake, until we deal with these issues, this will happen again.