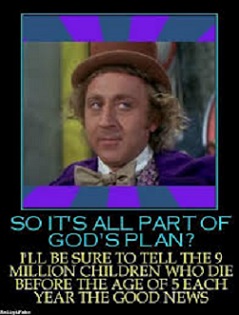 In case you’re wondering, the word in the title is a corruption the word “theodicy”. I changed it to “the-idiocy” because (brace yourself, I’m about to use a bad word) some people have fucked-up ideas about how God works, i. e. God caused so-and-so to happen so God could reveal God’s glory. Oh sure, they don’t say it that way; but, that’s what phrases like “If God brings you to it, He’ll bring you through it”, “It’s all part of God’s plan” and (one of personal favorites) “Everything happens for a reason” really mean. Every time I hear this garbage, I think “Wow, your god really sucks”. And, yes, I used a lower case “g” on purpose. Because any god who’d do shit like that doesn’t deserve an upper case “G”.

Many of us run into this crap when we’re dealing with illness and/or death. Of course, you’ll hear it in other situations, but I think these two are the most common. Thankfully, no one said anything like that around me during times I’ve been under the weather. Oh, there may have been an “Everything happens for reason” in there somewhere, but I don’t remember it. And, I say “thankfully” because when you’re suffering, the last thing you need to hear is that God, the entity you’ve praying to for some relief, is the actually the cause of that suffering.

Let’s get something straight right now: God doesn’t make bad things happen to people so God can be glorified by the good resolution of those bad things. I suppose it does make a twisted kind of sense, though. I mean, God making you sick, then curing you miraculously is a lot more conspicuous than God keeping you from getting sick in the first place. But, like I said earlier, that god would really suck.

I’ll even go so far as to say that God doesn’t make (or even allow) bad things to happen; we do. You could fill books with the evil that humans have ignored because it wasn’t their “business” or because they didn’t want to “get involved”. That’s not even mentioning that much of the nefarious bullshit in question is also perpetrated by human beings (and I use the term “human beings” loosely). Maybe it’s time we started taking responsibility for our screw-ups and stopped laying the blame at God’s doorstep.

None of this is to say that bad things can’t be turned to good (aka the “glory of God”). It happens all the time, but we’re usually too busy trying to find a way to spin things for “God’s glory” to notice God has already worked them out to the good. Miracles still happen, they just don’t look the way we expect them too. For me, the miracle of healing isn’t the healing itself, but that someone cares enough about others to do the dirty work of caring for the sick. And, if you’ve ever cared someone who’s ill, I mean well and truly ill, you know what I mean by “dirty work”.

I’ve used the phrase “God’s glory” in some form or another more in this post than I probably have in the last year. I don’t say it much because I hate it. It gets used indiscriminately and makes God sound like an insecure asshole. At some point, you have ask yourself
“Is a God who requires constant glorification actually worthy of that glory?” I don’t think so. Instead of talking about what glorifies God, why don’t you do something that, oh I don’t know, glorifies God. If you’re not sure what that might be, I’ll give you hint: it isn’t telling people that they are suffering so that God can be glorified. That’s bullshit and they don’t need to hear it.