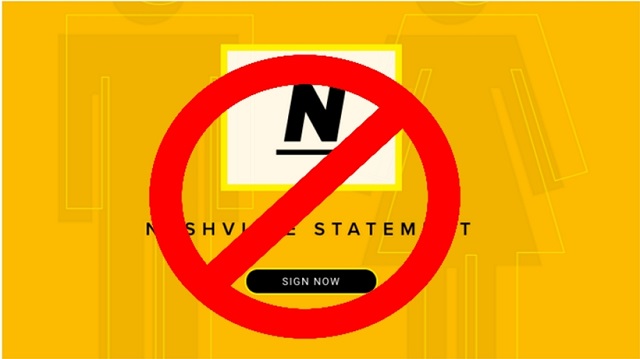 Recently, the Council on Biblical Manhood and Womanhood released something called “The Nashville Statement“. I suspect normal folks are blissfully unaware of this development. Those of us with any kind of connection to progressive theological circles? We aren’t so lucky. That’s folks in those progressive theological circles have lost their fucking minds about the Nashville Statement.

Is your curiosity piqued yet? Are champing at the bit to learn just what could be so awful that it would make thoughtful, tolerant, forward-looking clergy people work themselves into an absolute lather? Yeah, I didn’t think so. It’s not like this a rare occurrence; progressive folks have a well-documented history of losing their shit over things that, in the bigger picture, aren’t really worth… well, losing your shit over.

This time, however, it’s well justified because the Nashville Statement is more heinous fuckery from the people who brought you complementarianism (a fancy word for “Keep ’em barefoot and pregnant”); sounded the (false) alarm that same-sex marriage would bring society crashing down around us; and continue to promote the scientifically debunked practice of conversion therapy. Using a term as innocuous as “Statement” to describe this moral violation is too goddamned restrained. I’m thinking “Shitstain” is a better descriptor.

Before we go any further, I should probably warn you that, from here on out, things go downhill. I’m not going to get into the steaming pile of shit that is the Nashville Statement. Let’s just say it’s yet another swipe at the marginalized among us taken by the dominant culture; i.e., basically the opposite of everything Jesus said/taught during his time on Earth.

Of course, none of this is surprising when you consider that signers of the statement include James Dobson (Focus on the Family), Tony Perkins (Family Research Council) and John Piper (Desiring God website), all men who have built reputations and/or empires shitting on people who are LGBT+. Fuck those guys and everyone else who signed this awful document. Shit like this makes me long for the day when the Millenials finally take over.

Earlier, when I said people in progressive theological circles have lost their fucking minds about the Nashville Statement, I wasn’t kidding. Of course, when these folks lose their minds, it’s not like when you or I do. When we lose our shit, we cuss and throw stuff, call the target of our ire “assholes” or worse, and generally raise hell until our spleen is fully vented. But, when a progressive theologian loses it, they write a response to whatever is vexing them so and post it on line. And, it’s almost always thoughtful, well-written, and very, very composed. In other words, boring…as…fuck.

Just once, I’d love to see one of these progressive Christian thought leaders release a statement in response to some conservative evangelical bullshit that just burns it to the fucking ground. One that calls these motherfuckers out for the greedy, hateful bastards they are, ridicules their infantile interpretation of the Bible for the simplistic garbage that it truly is, and informs anyone that agrees with the views presented that should give up the name “Christian” because there is nothing of Christ in crap like the Nashville Statement. Instead, we get the following from the House for All Sinners & Saints’ Denver Statement: “WE DENY that God is a boy and has actual arms.” Really, Nadia? With your creative cursing ability, that’s the best you could come up with?

At least one person speaking out against the Nashville Shitstain seems to be of the opinion that it’s a good thing, because some of the people in churches that affirm it will see the hate they are embracing and have a change of heart. Yeah, and monkeys might fly out of my butt. Seriously though, Brian McLaren says in his response that this document “makes explicit what has been hidden”. Seriously? These fuckers have been very open and upfront about their feelings for LGBT folks for a long, long time. If anyone wasn’t aware of their beliefs on this matter, it’s because they didn’t want to be aware.

And, if the namby-pamby replies from progressive Christian leaders aren’t bad enough, there’s also an on-line petition making the rounds. Great! They fix everything and totally not a way for companies to get your email so they can spam the shit out of you with more worthless slacktivist petitions. How stupid do they think we are?

I’m sure some lovely progressive people reading this and are thinking to themselves that I’m being overly harsh in my assessment of the Nashville Statement and the responses to it; that I should be tolerant and loving; in other words, “nice”. If that’s you, try to get your around head this fact: These assholes have attacked my son’s humanity and intrinsic value with their “manifesto of Christian conviction a/b our creation as male and female.” I ain’t being nice about that.