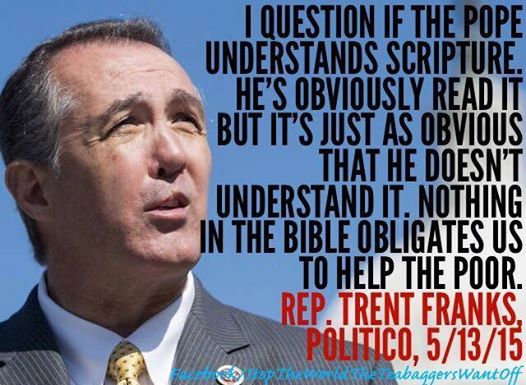 The meme to your left has been making the rounds on the internet, lately. Quite a few progressive people, myself included, were quick to share it. As memes go, it’s not bad. Well, except for one thing: Franks never actually said that. It  comes from the Facebook group Stop The World, The Teabaggers Want Off, whose stock in trade is publishing made-up quotes attributed to conservative politicians. Now, if this fabricated quote from Franks was the only thing on this subject making the progressive rounds, I’d just publish a retraction on Facebook and be done with it. But, it’s not. And, some of those things are real live quotes from real live people.

In the last few months (coinciding with the opening of the 2016 presidential campaign season, oddly enough), Republicans have finally started talking about income inequality. And, as you might expect, they are getting it wrong. Like Rick Perry, who said back in Decemeber that “Biblically, the poor are always going to be with us in some form or fashion.” Now, you may be thinking “But, the Bible does say that!” Yes, it does, but it doesn’t mean what Perry and his pals think it does. These yahoos are using it to justify their own greed by saying that poverty is just the way things are and we should learn to live with it. Personally, I think Jesus was making a dig at greedy-ass religious people when he said, “You always have the poor with you…” and that there was an unspoken trailer that went something like, “because you’re a bunch of selfish assholes.”

As blogger extraordinaire Fred Clark points out, much of what Jesus said references the Torah and needs to be understood in the proper context. This particular passage was based on Deuteronomy 15:11, which says:

Poor persons will never disappear from the earth. That’s why I’m giving you this command: you must open your hand generously to your fellow Israelites, to the needy among you, and to the poor who live with you in your land.”

My, that’s a bit inconvenient, isn’t it?

So, what’s a good conservative Christian to do when they read Jesus’ uncomfortable statements about “the least of these” or “the poor”? How are they supposed to maintain the status quo (which, incidentally, consists of judging, ostracizing and marginalizing certain people while keeping as much of their money as possible) when the man they claim to follow said they shouldn’t do that? Luckily, Denny Burk has come to their rescue.

Burk, professor of Biblical Studies at Boyce College, recently published an article which uses some very impressive mental gymnastics to say that the “least of these” Jesus referred to aren’t people in poverty, it’s “Christian” bakers, photographers and florists. On what does he base this claim? I’ll let him explain it in his own words: “… contrary to popular belief, “the least of these” in Matthew 25:40 is not talking generically about our obligation to care for the poor and needy. We know this because the terms “least of these” and “my brothers” appear elsewhere in Matthew’s gospel, and in each case the terms specifically refer to Jesus’ disciples who have been sent out into the world to preach the gospel.” Yes, beloved, Burk ignores the previous 9 verses where Jesus specifically refers to the poor, the hungry, the stranger, etc. to back up his contention that the real people we should be helping are Jesus’ “disciples”.  Isn’t it interesting when biblical literalists start interpreting scripture that doesn’t fit their chosen narrative?

Look, if you want to shit on poor people, that’s your business. But, I really don’t think you should use the Bible to justify such a despicable action. And, I’m pretty sure you shouldn’t claim you’re serving Christ while you do it. But, mammon? That’s a different story.